OnePlus 7 Pro took the mantle as one of the best selling ultra-premium smartphones on Amazon. OnePlus released its 7 series a few months ago and it is already gearing up for the 7T series launch speculated to be held on September 26 but it is still dubious. Well, even before the launch date could be announced, specs sheet for both OnePlus 7T, OnePlus 7T Pro Detailed Specs Leak with Launch Date which lists almost all specifications that we would be seeing in the two incremental models.

The OnePlus 7T and 7T Pro Specs in Detail:

According to the specs sheet, OnePlus 7T will offer a 6.55-inch FHD+ Fluid AMOLED display with 90z refresh rate, HDR10+ with 2400×1080 pixel resolution and a pixel density of 402 PPI. Opposed to that, the ‘Pro’ OnePlus 7T will get a slightly larger and rich 6.65” QHD+ Fluid AMOLED display with 90Hz refresh rate, HDR10+, with 3100×1440 pixel resolution with a 516 PPI pixel density. Furthermore, the listing shows that both the 7T series smartphones will grab the overclocked Qualcomm Snapdragon 855+ SoC which delivers 15% more graphics processing and 4% higher CPU performance bundled with enhanced Adreno 640 GPU which is faster than the Snapdragon 855 SoC as well. 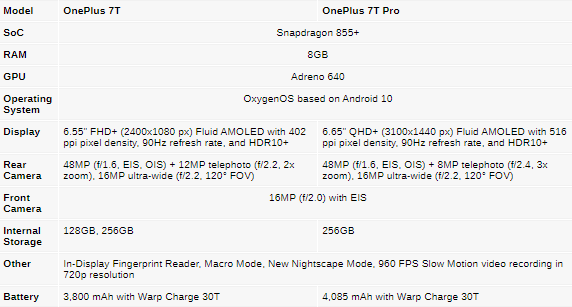 OnePlus 7T and OnePlus 7T Pro list a single 8GB RAM variant although I doubt since OnePlus usually goes at a max 12GB RAM as of recent flagship smartphones so I don’t find it satisfying that the increment models will not have a 12GB RAM variant as well. About the storage, the OnePlus 7T will have 128GB and 256GB variants while the Pro variant will have 256GB of internal storage although there might be a higher version too since OnePlus smartphones don’t support expandable memory options.

Both the phones will run on the upcoming Android 10 based OxygenOS 10 and both will have an in-display fingerprint reader that was introduced with OnePlus 6T last year. OnePlus 7T is speculated to have a 3,800 mAh battery compatible with Warp Charge 30T known to be 20% faster than the one used in OnePlus 7 Pro. On the other hand, OnePlus 7T Pro will have a larger 4,085 mAh battery supporting Warp Charge 30T which is equivalent to what its non-Pro variant will offer. 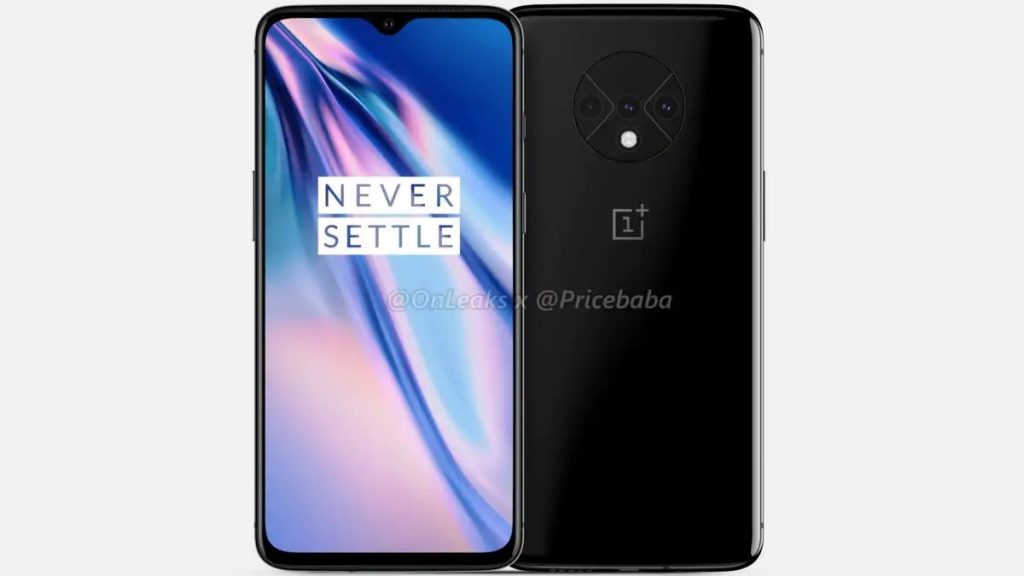 Finally, the specs sheet details more about the optics where both the devices will have a 16MP front camera module housed in a pop-up camera module with EIS and an aperture of EIS. Furthermore, the rear camera setup for OnePlus 7T will have a triple camera setting with primary 48MP with EIS, OIS, and f/1.6 along with secondary 12MP telephoto with 2x zoom, f/2.2, and finally, the third sensor will be a 16MP ultra-wide camera with a 120° field of view along with an aperture of f/2.2.

The rear triple camera setup on the OnePlus 7T Pro will be slightly different with the same primary and ultra-wide sensor but with a third 8MP telephoto with 3x zoom and f/2.4 that will allow it to grab better photos and even in low-light with less noise in the photos as well.

Until today, we believed that OnePlus will announce the duo OnePlus 7T and OnePlus 7T Pro on September 26 in India along with OnePlus TV followed by a global launch on October 10. However, leakster OnLeaks recently posted a tweet claiming that the earlier date might not be for smartphones and that the Chinese smartphone maker will resort to launch the duo on October 10 followed by sales commencing on October 15.