Poco has reprised the Poco F-series with the new Poco F4 GT powered by Qualcomm Snapdragon 8 Gen 1. The device looks flamboyant with its gaming-focused design that looks straight out of the future. Let’s see what the phone actually brings onboard.

Talking about the early bird offer, it is at EUR 499 for 8GB+128GB while the 12+256GB variant is up for sale at EUR 599 across Poco Store, Amazon, Shopee, Allegro, AliExpress, and a few more. Once the offer ends, the phone will assume pricing of EUR 600 and EUR 700 respectively. It will be available with an early bird offer between April 28th to May 5th. 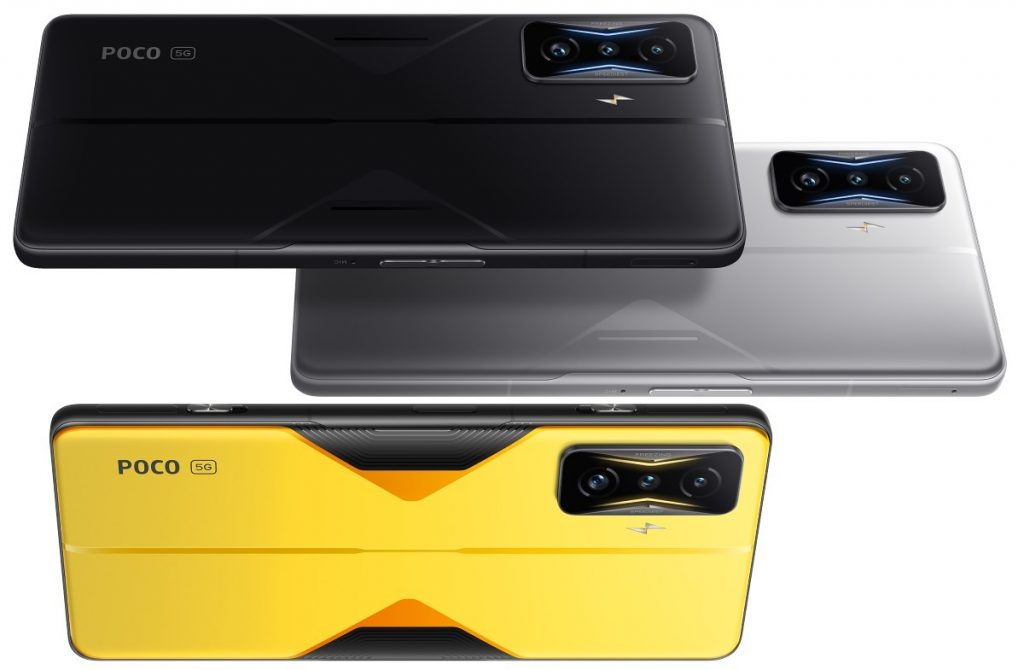 To start with, the device has got a vibrant 6.67-inch AMOLED 10-bit panel capable of showing 1 billion colors. There’s a 120Hz refresh rate on the device with high-frequency PWM dimming. The display has been scored A+ by Dismate across 15 display performance records.

Moving on, the device brings onboard a 480Hz touch sampling rate which is way up from the 360Hz sampling rate on Poco F3. F4 GT brings onboard shoulder buttons for additional controls which is something gamers will like for sure. In fact, the device has been tested to support more than 100 popular games that you can play with the shoulder buttons. Above all, these are magnetic pop-up triggers so you can retract them at will. 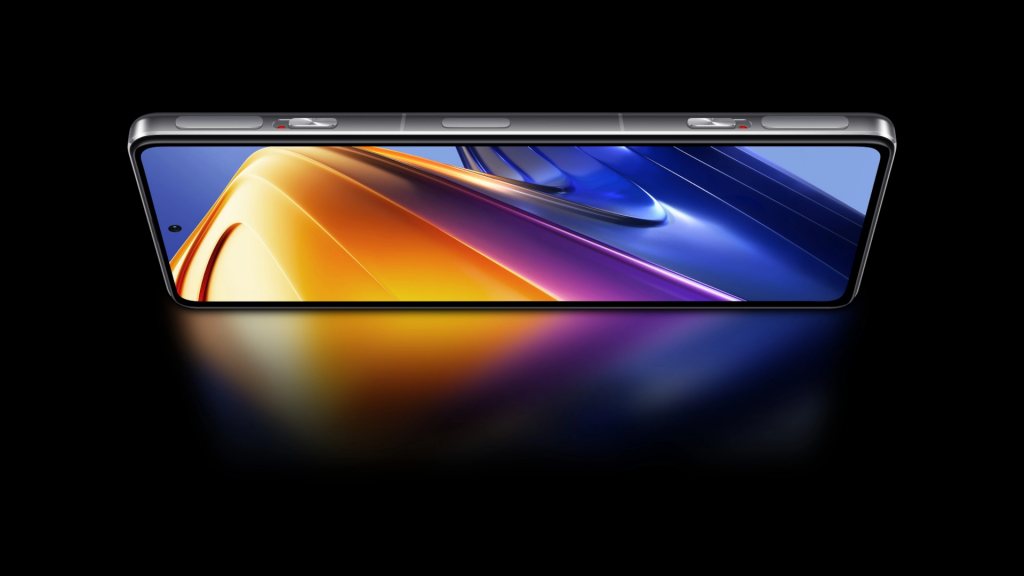 The device brings onboard a powerful Qualcomm Snapdragon 8 Gen 1 chipset paired with LiquidCool 3.0 technology that uses two vapor chambers to cool off the device when gaming on it. In fact, the vapor chambers onboard Poco F4 GT are 170% larger than that of F3 GT so expect it to have better performance than its predecessor for sure. There’s an enhanced Adreno 730 GPU that handles its graphics processing. You do get two storage trims i.e. 8GB+128GB and 12GB+256GB UFS 3.1 storage while the RAM onboard is an LPDDR5. Finally, there’s Android 12-powered MIUI 13 for Poco onboard.

Moving on, the device has got some serious battery specs right here. You get a beefy 4,700 mAh battery paired with a 120W HyperCharge system capable of juicing it up from 0 to 100% in less than 17 minutes. You can change modes when charging where the device churns out less heat and takes 27 minutes to charge to its full capacity. 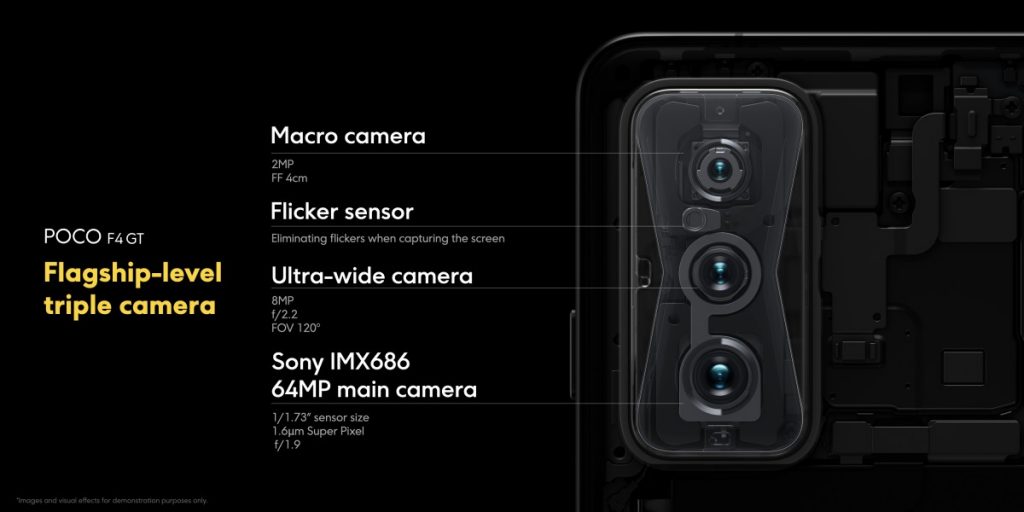 Talking about the camera rig, Poco has done something to change how cameras on gaming phones are. You get a 64MP Sony IMX686 primary cam with 1/1.73” sensor size and 1.6micron Super Pixel; an 8MP ultrawide snapper with f/2.2 aperture and 120° FoV, a 2MP macro camera, and a flicker sensor that takes care of any flickering when shooting a photo or video. On the front, you get a Sony IMX596 20MP camera setup.

By the looks of it, the phone looks amazing with a triple rear camera with RGB backlighting on the back panel. You can choose from three majestic color variants aka Cyber Yellow, Knight Silver, and Stealth Black and to be honest, all these colors look brilliant. 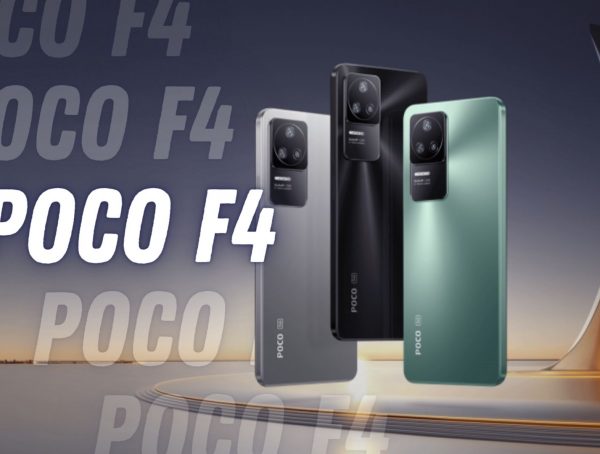 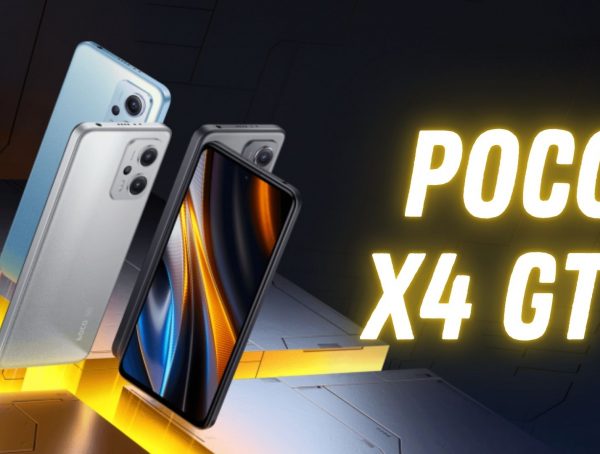 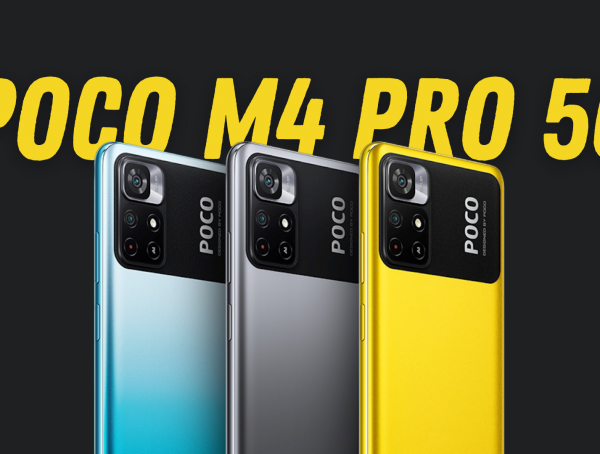