After a lot of waits, POCO has released its second smartphone. The new POCO X2 is a new series of smartphones focusing on games & excellent performance among other aspects that make it an all-rounder in a budget. The launch event divulged specifications and demos led by Manmohan Chandolu, General Manager at POCO India. Here’s everything you need to know about the POCO X2 launched: 120Hz display, Snapdragon 730G at Rs 15,999/-.

But before I begin it, POCO X2 is not a successor to POCO F1 but a whole new series of phones keeping the interests of gaming and tech enthusiasts in mind. 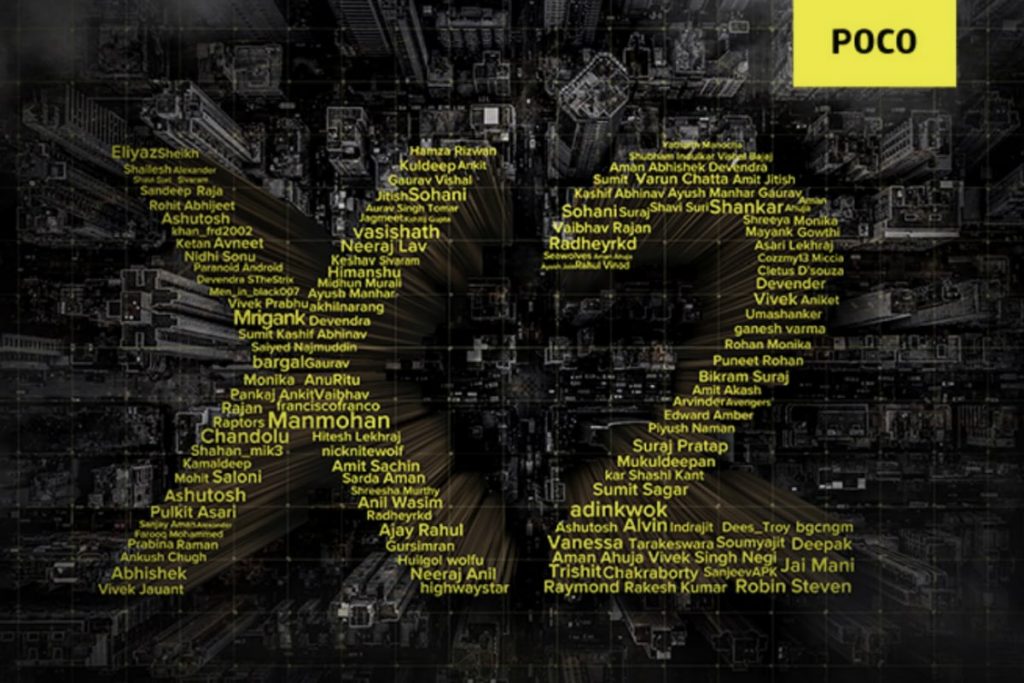 I must agree that POCO X2 appears to be one of the best-designed smartphones. It doesn’t take rocket science to know that POCO X2 shares most of the design & hardware elements to the flagship Redmi K30. The front has a 6.67-inch IPS LCD panel with POCO’s Reality Flow Smooth Display with a refresh rate of 120Hz. The display is rich and vibrant, all the colors pop up brilliantly thanks to the 386PPI 1080×2400 pixel resolution. It is also great an alluring fully immersive experience thanks to the wide 20:9 aspect ratio and no notch. Yes, POCO X2 doesn’t have a notch but two punch-hole cutouts for dual cameras at the front. Sadly though, we do not see an AMOLED panel, although it’s nit=picking at the price range the phone is announced at.

The bezels are pretty slim, the chin is tiny as well giving the phone a premium look. Apparently, POCO achieved a commendable 120Hz refresh rate with two major applications in mind i.e. enhanced gaming and enhanced app experience that makes the display faster, smoother and quicker. In fact, the display creates transitions that are beautiful even if you view it in slow motion unlike a display with a 60Hz refresh rate. It also employs Intelligent Dynamic Refresh Rate (IDRR) that enables the display to raise up to 120Hz when in use which slips back to 60Hz when not in use to save battery consumption which is often a major issue with this technology. 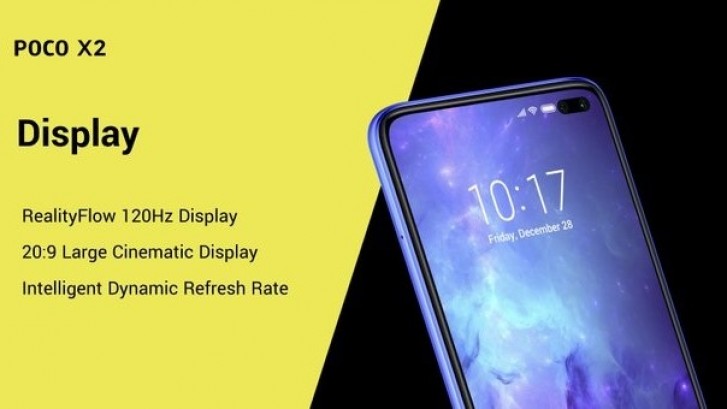 The rear panel is where a major attraction awaits i.e. a quad-camera setup arranged in a vertical stack right at the center. There’s a circular gradient ring around the lenses that reminds us of Xiaomi Redmi K30 and even Huawei Mate 30 Pro where the latter calls it Halo Ring. The circular ring around the camera bump reflects light differently thanks to the back panel making it look lustrous and brilliant when it comes to the design standpoint.

POCO has done a great job upgrading the X2 with the latest specifications & hardware. It arrives with a powerful Snapdragon 730G octa-core processor which is the fastest in the 700-series. It has two 2.2GHz Kryo 470 Gold high-performance cores and six 1.8 GHz Kryo 470 Silver power-efficient cores on-board along with Adreno 618 GPU tried and tested to offer 15% faster performance than its predecessor.

In fact, POCO X2 scored a whopping 274,334 points on AnTuTu compared to 260,583 points by Realme X2. One of the best things about the new POCO X2 is that it arrives with state-of-the-art liquid cooling technology that helps the phone dissipate heat 300% faster than those without any cooling technology. This is what enables the phone to perform optimally at its peak even after several hours of usage whereas Realme X2’s performance will surely take a nosedive as those in the graph during the launch event and that does make sense.

Apparently, the phone comes with Core Level Software Optimization that works in congregation with other high-quality components giving it the ability to outperform its competitors and produce the same level of peak performance during strenuous tasks like playing PUBG Mobile or any other graphics-intensive tasks.

The smartphone maker apparently optimized 35 apps that we as users use on a daily basis that run faster and can be recalled even quicker when compared to Realme X2. Furthermore, the phone sports UFS 2.1 Storage and a lightning-fast 6/8GB of LPDDR4X of RAM that aids is faster resource allocation and performance, unlike the rivals the phone is battling against at this competitive price point.

The phone has a face unlock and side-mounted fingerprint scanner setup along with support to three navigation satellite systems and more.

POCO from Xiaomi has always kept adding new features via OTA on its existing POCO F1 and the new X2 won’t be an exception. It arrives with a dual punch-hole front camera assembly and quad-camera module at the back that adds to its glory.

Talking about the camera department, POCO X2 is the first smartphone in India to arrive with Sony IMX686 64MP primary camera sensor at the back. It is extensively refined to capture and output detailed images with almost all the details retained, the sharpness is on-point while the colors in the photos are vibrant and lively. The sensor does perform optimally great even during low-light conditions thanks to the 4-in-1 pixel binning technology that gives it access to a larger 1.6microns pixel size for a better quality of images with little noise.

The primary sensor at the back is flanked with a 2MP depth sensor that allows adjustable background blur during post-processing and can output excellent portrait images so that’s a plus. There’s an 8MP ultra-wide-angle camera on-board as well with 120° FoV that takes brilliant landscape photos and finally, there’s 2MP macro sensor that retains most of the details even after you point the camera at just 2cm away from the subject. In comparison, Realme X2 requires a 4cm minimum distance to capture macro shots.

At the front, we have dual camera setup as said that includes a primary 20MP sensor and 2MP depth sensor which is also able to grab excellent images with bokeh effect. In fact, the cameras are far refined from the already impressive hardware on Poco F1 so buying the new phone does make a lot of sense.

POCO X2 arrives with two new features that are RAW Image Capture which keeps RAW images intact in case the users want to process it later and 7 styles under its VLOG mode that is pretty much a great feature for all those vloggers out there.

The phone arrives with a humongous 4,500 mAh battery which puts Realme X2’s 4,000 mAh battery to shame for sure. Although official stats for the battery’s endurance are still unavailable, the phone will surely last more than a day even on moderate usage. It also comes with a 27W fast charger in the box so charging the phone to its full capacity takes just 68 minutes and that’s an hour and 8 minutes while Realme X2 takes 76 minutes to charge the battery to the fullest.

Xiaomi’s sub-brand Pocophone released POCO F1 in India on February 4th and it is available in three variants. Starting with the base model bearing 6GB+64GB, the phone is available at just Rs 15,999/-, the 6GB+128GB model will arrive at Rs 16,999/-, the largest 8GB+256GB model is available at Rs 19,999/- which is basically less than what POCO F1 pricing was in India during its release.

The phone is available in three color variants that are Atlantis Blue, Phoenix Red, and Matrix Purple so do check it out on Flipkart and get one of it for yourself. 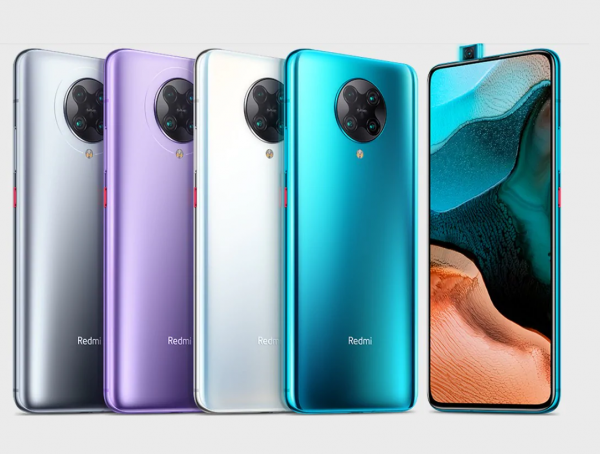 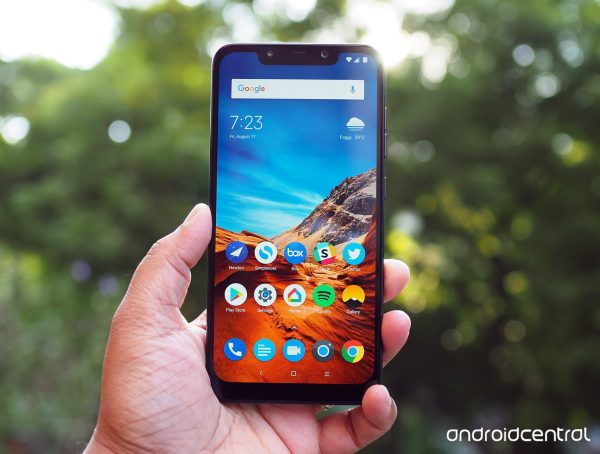