Xiaomi has released all the models of Redmi Note 9 series and now it is the time to toss in its Redmi 9 series. Previously, we have already seen that the Redmi 9 moniker was found on the official Xiaomi RF Exposure site and the same device was also spotted at 3C and EEC certification sites as well. Now, in recent times, Redmi 9 has received approval from the FCC Authority in the United States and these FCC documents have revealed some of the key specifications of the Redmi 9.

According to the reports from Nashville Chatter, the FCC documents revealed the battery capacity of the Redmi 9. The rated battery capacity of the Redmi 9 is 4920 mAh which indicates is that the could be shipped with a battery that has a capacity of 5000 mAh. The battery capacity is similar to what Redmi 8 brought to the table. According to the previous reports Redmi 9 was found with model number M2004J19G. As mentioned earlier, the phone was listed with the same model number on the official Xiaomi RF Exposure site. Also, the device with the same models M2004J19G passed through 3C and EEC. 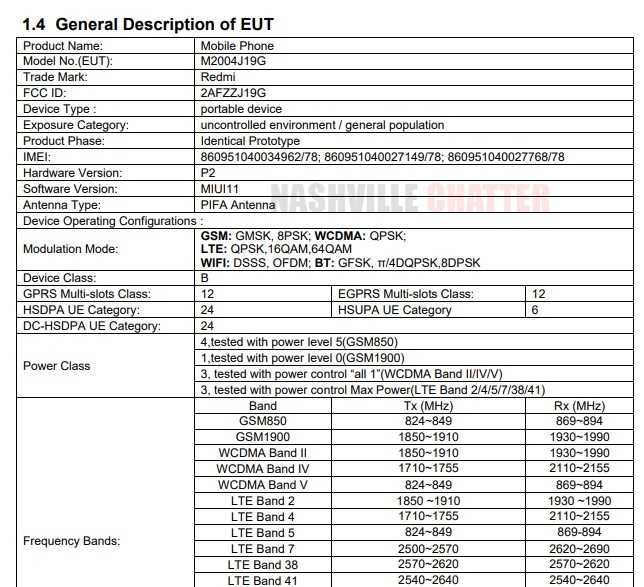 The FCC listing also revealed that the Redmi 9 will come pre-installed with MIUI 11 with Android 10 out of the box. This likely suggests to us that the phone is just a few weeks away from the launch. Although FCC listing does not reveal anything around the charging speeds of the device, previous reports speculated that the company will pack in the device with 10 W charger. That is a huge let down considering the predecessor Redmi 8 was packed in with 18 W charger.

Redmi 9 was already leaked in the past and according to leakster Sudhanshu, the Redmi 9 will be powered by MediaTek Helio G80 SoC and will also come in various configurations with the base model having 3 GB of RAM and 32 GB of onboard storage. Also, this entry-level smartphone is expected to pack quad-rear cameras with Poco X2 like back design where the whole setup is inside a ring with a different gradient.

Redmi 9 is a successor to Redmi 8 series which was released last year. This is generally an entry-level smartphone series by the company. Redmi 9 features a 6.6-inch IPS LCD display with a resolution of 720 x 1600 pixels. The pixel density of this display is 266 PPI and the aspect ratio here is 20:9. Considering the IPS LCD, you cannot expect this device to support an in-display fingerprint sensor. Previous leaks also suggested that the display will be protected by Corning Gorilla Glass 5.

As for the optics, the device is going to come with a quad-camera setup on the back. The primary unit is expected to be 13 MP sensor with F/1.8 aperture. The secondary unit is an 8 MP ultra-wide sensor with F/2.2 aperture. The tertiary is a 5 MP macro sensor for close-up shots and the fourth sensor is a 2 MP depth-sensing unit. The details of the selfie camera are not known.

The Redmi 9 will run Android 10 OS out of the box with MIUI 11 skin on top. MIUI is a feature-rich interface that comes with a lot of features. The rear-mounted fingerprint sensor, Micro USB port, 3.5mm headphone and more take an account here. All this is powered by a 5000 mAh battery without fast charging support.