Remember when OnePlus co-founder Pete Lau made it official that OnePlus TV is actually in the making, well this is basically the next bit of information that we have come across almost after a year after it was reportedly in its preliminary development stage. MySmartPrice reports how OnePlus TV has landed on Bluetooth SIG listing on July 11 with respect to its OnePlus Remote Control.

Although this current listing is more of its smart Remote Control, it is a clear sign that OnePlus is heading towards the apparent launch of the upcoming OnePlus smart TV scheduled for launch at the end of this year or early next year.

Talking about the listing dated 11 July 2019, it shows OnePlus Remote Control with the model number RC-001A. The listing does mention that it will support Bluetooth 4.2. Although neither the listing or the report contained any images or visual representation of the upcoming smart TV from Chinese manufacturer OnePlus, it is clear that it will be bang on thanks to the various features that Pete Lau highlighting last year in September. 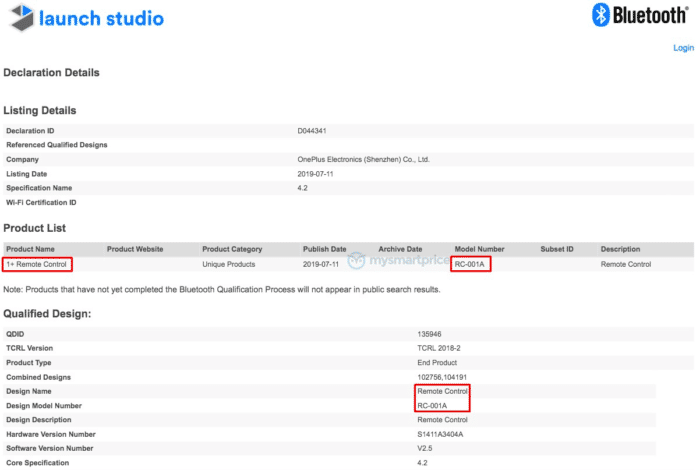 Pete Lau stated how OnePlus TV will be different from other smart TVs as it will act as a smart hub thereby allowing users to control smart home appliances and ecosystem right by using the TV as reported by TechTantrum. It will be equipped with artificial intelligence that will make sure you can the premium features and functionalities in a smart TV with LCD display instead of an OLED display that would enable the brand to bring down the cost of the smart TV and target an aggressive INR 40,000 to 50,000 although this is just an assumption and not official price range for the same.

OnePlus TV can do a number of tasks such as booking cabs and showing notifications, etc. It can also connect with your smartphone seamlessly. Furthermore, it will sport a front-facing camera that will be integrated with security solutions that will make sure the smart TV is privacy or security-threat free.

According to MySmartPrice, the TV is expected to target Xiaomi’s top-end models in terms of price range and features. OnePlus hasn’t actually confirmed any leaks and rumors that have been coined around its upcoming smart TVs and neither hasn’t mentioned any release date but there’s a vague launch date i.e Q4, 2019 or early 2020 so stay tuned here on True-Tech to know more.