In less then two hours from now, the widely rumoured Samsung Galaxy S10, S10+ and S10e will be debuted at the official 2019 Samsung Unpacked event, in San Francisco, California. Interestingly, Samsung has chosen to skip MWC and host an independent event, that will finally give rest to the massive leaks outburst, and take off the wraps over everything Samsung has to showcase. The launch event will be live streamed at 11:00 am PST, 6:30 am AET, 2:00 pm ET and 7:00 pm GMT today (February 20th), and 12:30 am IST (February 21st).

Whilst the launch will be broadcasted live Samsung’s website, we have embedded the YouTube stream right here for you to follow along with our live updates feed right under the video. The event will also be broadcasted on the company’s Facebook and Twitter pages. Nonetheless, TrueTech will provide a complete coverage on everything that is announced at the event. Stay tuned here, and click here for all the latest updates.

TrueTech will bring all the updates right to you, from the 2019 Samsung Galaxy Unpacked event, as and when they happen, in a concise format.

3:19 PM EST: The Galaxy S10 will have a 5G version with the same form factor. Samsung says the Galaxy S10 5G will have amazingly fast speeds. Coming in with 6.7-inch display, and 4,500 mAh battery. And it will charge faster with a 25Watt charger. The S10 5G comes with a 4-camera set up. It adds blur and depth to video in real time, with a 3D depth sensing camera (fourth sensor).

3:08 PM EST: The Galaxy Watch adds to the last year’s Galaxy watch, as it becomes more water resistant and is lighter. It’s a full smartwatch experience The Galaxy Watch Fit is a smartwatch dedicated to fitness and has a design like a Fitbit. It lasts a week on a single charge. All the wearables and the buds connect as fast as the AirPods do with iPhones. The integration seems seamless and quick. Samsung’s call and text continuity allows for answering calls and texts from a Galaxy Tab S5E rather than using the phone.

3:05PM EST: All new Galaxy buds showcased, appearing to have a smaller form factor than the AirPods. They are also tuned by AKG. They feature adaptive-dual microphones (one inside, one outside).They all have Bixby integration, which now supports German, Italian, and Spanish. They come in a case that can charge wirelessly. They’ll be available starting March 8th.

2:42 PM EST: The Galaxy S10 comes with 4,100 mAh battery with better power management optimization. The phone let’s you wirelessly charge other phones using the reverse-wireless charging feature. The phone also has 36% faster wireless charging. It is also the first phone to be compatible with WiFi 6, which is 4 times faster in public areas.

2:42 PM EST: The Galaxy camera’s SDK has been made open, all apps can now benefit from all the Galaxy S10 photo modes. Instagram mode comes integrated in the camera itself. Also SnapChat has made its app compatible. The Samsung phones will go upto 1TB storage and with support to 512GB memory card slot, and a 12GB RAM. The new chipset allows for 29% better CPU speeds, and 37% better GPU speeds than S9.

2:34 PM EST: World’s first untrasonic fingerprint sensor is placed under the display. Safer and more accurate than the current optical ones. The data is secure through machine learning, and any 3D or 2D fake fingerprints are easily identified, making it extremely difficult for hackers. The phone’s come in 3 colour finishes.

2:31 PM EST: The Samsung Galaxy S10. The display goes further towards the edges, the phone comes with precision-cut hole for camera(s). The display is called “Infinity-O AMOLED display”. The most colour accurate display on a mobile device
2:27 PM EST: In a promo video, the Galaxy S10 Plus is shown off. Exactly Alike the leaks, featuring a camera hole in the display. The video also shows reverse wireless reverse charging.

2:16 PM EST: The phone will come at $1,998 and can be purchased starting April 26th. It’ll come in a premium package with a new set of dynamic earbuds.

2:11 PM EST: 6 camera system – two in the inside, two on front and two on rear. Allowing for continuity. They showcase how Google maps transcends into larger screen as the device is unfolded. The same was been showcased with Netflix. With that, Samsung also showcased 3-way app multi-tasking with texting, browsing google and video calling/watching videos.

2:00 PM EST: The event commences with a historic video on Samsung’s development – 10 years down the line to now. 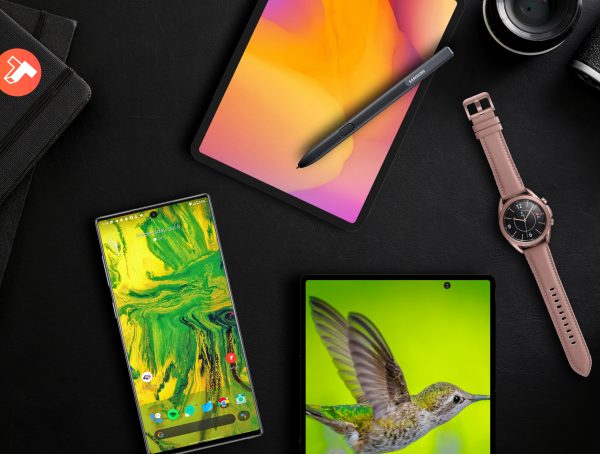