Samsung Galaxy A72 4G appears on Geekbench with SD720G, 8GB RAM and Android 11

Samsung Galaxy A72 is incoming and it is expected to launch in early 2021. More and more details are being released either from official or unofficial sources about the Galaxy A72 which has two variants i.e. a 4G and a 5G with model number SM-A725F and SM-A726B.

The Samsung Galaxy A72 4G made its entry on the Geekbench just recently scoring 549 points on its single-core and 1637 points on the multi-core test. Apart from that, the Geekbench listing also gives out information on some of the specifications including the fact that the device is powered by Qualcomm Snapdragon 720G SoC along with Android 11 and 8GB of RAM. There’s not much information available about the upcoming Galaxy A72 so we are stuck with what’s known via renders, leaks, and other sources. 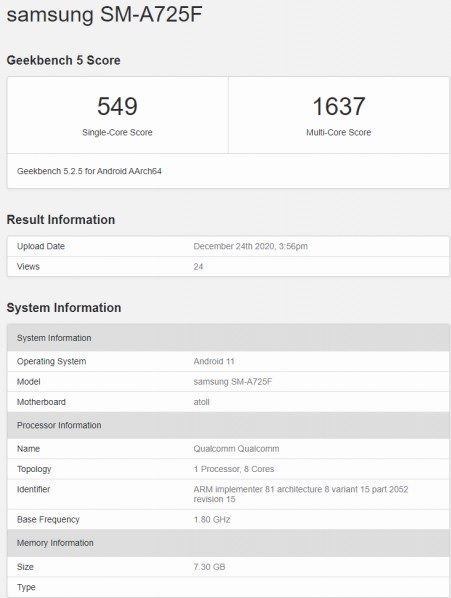 Apparently, the device is likely to pack in a 6.7-inch punch-hole display that was earlier revealed in Galaxy A72 renders. It also puts out that the phone boasts a quad-camera setup housed in a rectangular camera setup. The setup includes a 64MP primary sensor clubbed with a 12MP wide-angle a 5MP macro and a 5MP depth sensor on-board. The specifics related to these sensors and the front selfie shooter are still vague.

The device packs in a Snapdragon 720G processor under the hood clocked at 1.80GHz base frequency. If you kind of recall it, this is the same processor that Galaxy A52 packs in as per its Geekbench listing. Proceeding further, the device is likely to be priced between €550 to €600 for its 5G variant while the 4G is available at a cheaper €450 to €500. About the color options, the phone is primarily available in at least these four colors – Violet, White, Blue, and Black. There could be other color options as well.

Samsung Galaxy A72 4G and 5G are expected to arrive early next year although the launch date hasn’t been revealed yet.