The Samsung Galaxy A72 is likely to arrive in both 4G and 5G variants once it does. Well, the folks at WinFuture got their hands on a full specs sheet and the official renders of the device that goes in-line with December’s render leak.

According to the latest full specs sheet leaked, the Samsung Galaxy A72 4G is almost similar to its 5G counterpart except for the 5G support. The device offers a giant 6.7-inch FHD+ 90Hz Super AMOLED panel with a punch-hole cut-out at the center. We are talking about a minuscule punch-hole cut-out that houses a 32MP selfie snapper. There’s an in-display fingerprint scanner that takes the advantage of having an AMOLED panel.

The device sports a quad-camera setup arranged in a similar setting to Samsung Galaxy S20 Ultra with three humongous sensors and a fourth sensor adjoining it. The latest specs sheet states that the device will have a 64MP primary snapper along with a 12MP ultrawide snapper, an 8MP telephoto sensor with 2x zoom and a 2MP macro sensor making up the quad-camera setup. Here, the earlier specs sheet stated that the device will retain the 64MP primary, a 12MP ultrawide snapper while swapping the other two with two 5MP depth and macro units. 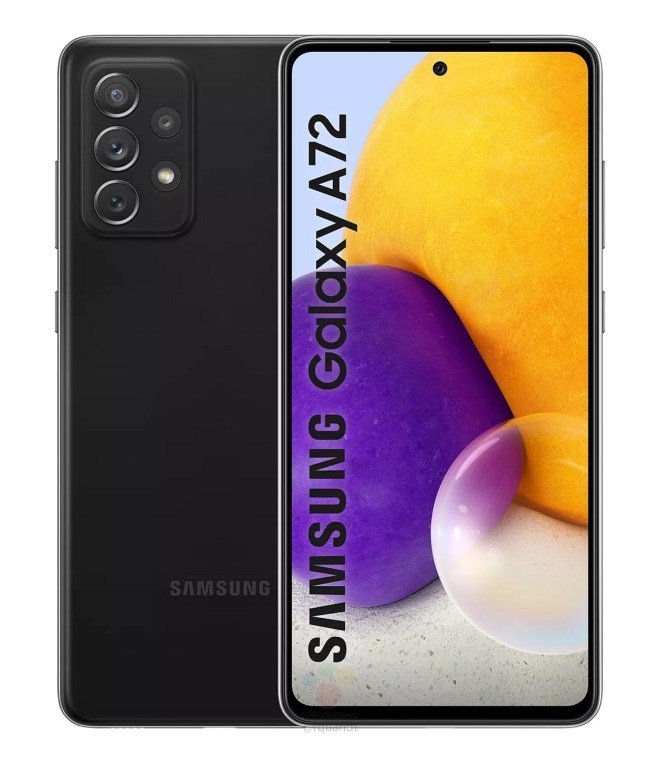 Next up, we have a Qualcomm Snapdragon 720G SoC under the hood which arrived on Geekbench earlier. The device also packs in an 8GB RAM along with 128GB and 256GB of internal storage options. There’s a microSD card slot that will enable storage expansion which is something turning scarce on smartphones.

Most interestingly, the Samsung Galaxy A72 has an IP67 water and dust rating that will surely work in its favor. Next up, we have a colossal 5,000 mAh battery under the hood which is supplied with a 25W charging adapter as was mentioned on an FCC listing for the 4G variant.

Talking about the pricing available for the 4G variant, the device is expected to commence at €449 for its 128GB variant while the higher 256GB variant will carry a price tag of €509. The device will arrive in four major colorways at least. There’s yet more information that we are yet to fill in w.r.t. the upcoming Samsung Galaxy A72. Unfortunately, we don’t have information on when it will launch so you will have to wait for more information that will arrive soon.