Voo accidentally posted the prices of the three variants that will retail in Europe and the specs sheet of the models. Even though the pages have been removed, a tipster was able to grab some screenshots before the removal. Going by the listing, the vanilla Galaxy S21 with 128GB storage will probably sell for $849 off-contract. Galaxy S21+, on the other hand, will retail for $1,049, while the Galaxy S21 Ultra will sell for $1,399 for the base 128GB storage versions. This is much like the $1,000 price tag for the Ultra that was tipped earlier. 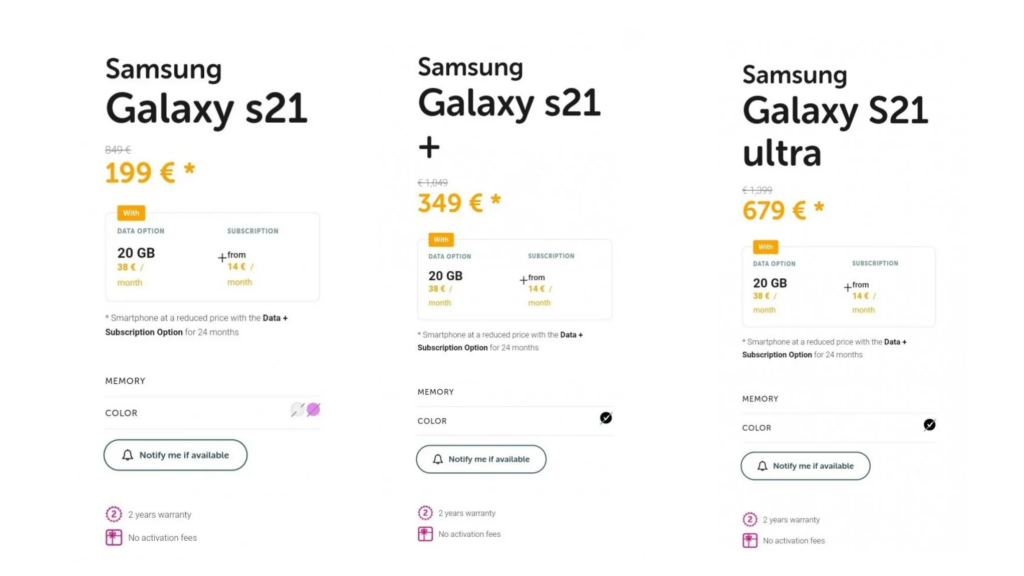 Another interesting aspect here is that the other two models are comparatively cheaper than their predecessors. Having a look at the specs sheets grabbed from Voo’s website before the landing pages were removed, we could gather that the EU versions are likely to launch with an Exynos 2100 chipset onboard. This is not totally a bad thing considering the efforts put in by Samsung from the processor development. We expect the performance to be topnotch. Just like every time, Samsung will launch Snapdragon 888-powered versions for select markets.

According to the previous reports, Galaxy S21 may seem pretty much like the Galaxy S20 based on the renders we have seen. According to Ice Universe on Voice, the S21 includes a vertical camera setup that appears to be almost similar to Galaxy Notice 20 series. The front screen is flat rather than curved. Ice Universe has also disclosed that the S21 and S21 Plus may come with the same 2.5D displays found on S20 counterparts, even whereas the S21 Ultra will include a more conventional curved screen. As far as the S Pen is concerned, it is more probable that the device provides S Pen service. But it is worth noting that the leaked renders do not demonstrate a visible place to get an S Pen. The device may support the S Pen after a software update. Now this means the S Pen must be placed separately when not in use.

Samsung may follow Apple’s lead in eliminating both the charger along with earphones in the box of this Galaxy S21 series, based on various reports. Again, this is not the first time that Samsung has removed the headphones from the retail box, as the Galaxy Z Fold 2 shipped without headphones in the US.