Huawei nova 5T will soon join the forces with nova 5, nova 5i, nova 5 Pro, and nova 5i Pro as per the latest post by Huawei on Facebook.  Huawei posted a teaser for its “We Are Nova Fashion Showcase” at Kuala Lumpur Fashion Week in Pavilion Centre Court with the tagline “Huawei nova 5T Global First Official Look” on August 25 which is barely a few days away.

We barely know about the upcoming nova 5T, however, thanks to Google’s Enterprise leak which has information across all smartphones with Android, we knew that the device will have a 5.5-inch display which discards any resemblance to Honor 20 as it was previously speculated since the latter has a 6.26-inch display.

Proceeding further, the Enterprise page did have a photo of its front-side although the page has been removed. The photo showcases tiny bezels around the edges while a front punch-hole camera stays similar to Honor 20 but there are many striking differences between the two phones.

Unlike Honor 20 with a single storage option, Huawei nova 5T brings 8GB of RAM on the table along with 128GB or 256GB of storage although there’s no expandable memory storage but hey, 128GB is more than enough for majority of people although a 256GB will be more than enough to store anything you can think of without worrying about the lack of storage, but it will be a little expensive than the 128GB model.

Although Huawei hasn’t made any details about the nova 5T official yet, but thanks to 91mobiles, here’s a specs sheet that the phone could offer although take it with a pinch of salt. 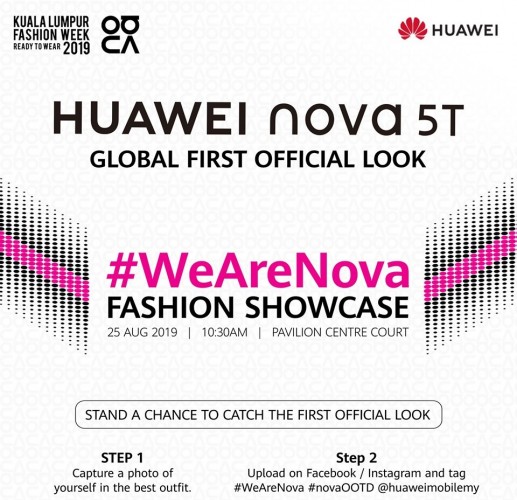 The Huawei nova 5T will sport a 5.5-inch (confirmed) IPS LCD with a front punch-hole camera (confirmed) with 32MP sensor. We don’t know how it’ll look from behind but we do know that it will pack in a quad-camera setup probably with 48MP + 16MP + 5MP + 2MP sensors with HDR, Digital Zoom, Face Detection, and other features.

One of the most crucial aspects of a smartphone is its performance and I think Huawei nova 5T will bash it all with its HiSilicon Kirin 980 octa-core SoC that comprises of 2.6GHz dual-core, 1.92GHz Cortex A76 dual-core plus 1.8GHz Cortex A76 and finally,  a power-efficient Cortex A55 quad-core 64-bit processor with Mali-G76 MP10 and if it turns out to be factual, then we can expect high-performance without any doubt.

However, let’s wait till August 25 when Huawei will showcase its Huawei nova 5T for the first time.