LG has announced its next generation OLED TV displays at CES 2021. As most of you already know, this year’s CES is virtual, but that’s not stopping LG from showing its futuristic display concepts. These OLED TV display’s are said to feature improved picture quality and higher efficiency numbers. LG will be rolling out this technology to their entire OLED TV lineup and company has also introduced two new sizes. The existing LG OLED TV lineup includes 88 inch, 77 inch, 65 inch, 55 inch, and 48 inch models. Now, the South Korean giant has announced 83 inch and 42 inch sizes. 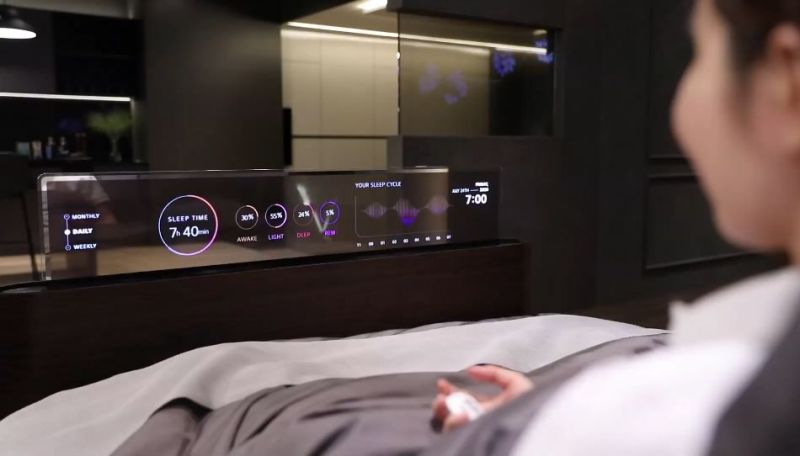 The first of LG’s innovation came in the form of a 55-inch transparent OLED Smart Bed. This bed frame comes with an adjustable transparent OLED at the foot of the bed. This can elevate to various heights to display different information. When you are not using, it will display a set of different information like the time, weather, and audio track which is currently playing, just like the ambient or always-on display feature of your smartphone. If you would want to see more information, the display can rise or elevate out of the frame. The features here are endless and LG Display showcased each of them in detail. For starters, it can analyze your sleep patterns and also acts as an alarm clock when needed.

The display here is 40% transparent, meaning you can see through the display when you are watching something on the display. This display comes really handy in public places like theatres, restaurants, and in the transport too. Jong-sun Park, Senior Vice President and Head of Commercial Business at LG Display said in a statement that “Transparent OLED is a technology that maximizes the advantages of OLED and can be used in various places in our daily lives, from stores, shopping malls, and architectural interiors to autonomous vehicles, subway trains, and aircraft.” Jon-sun further added that “It will grow into a next-generation display that can change the existing display paradigm.” It is worth noting that there is no indication whether or not this new transparent OLED TV will become a real product at some point in future as of now. 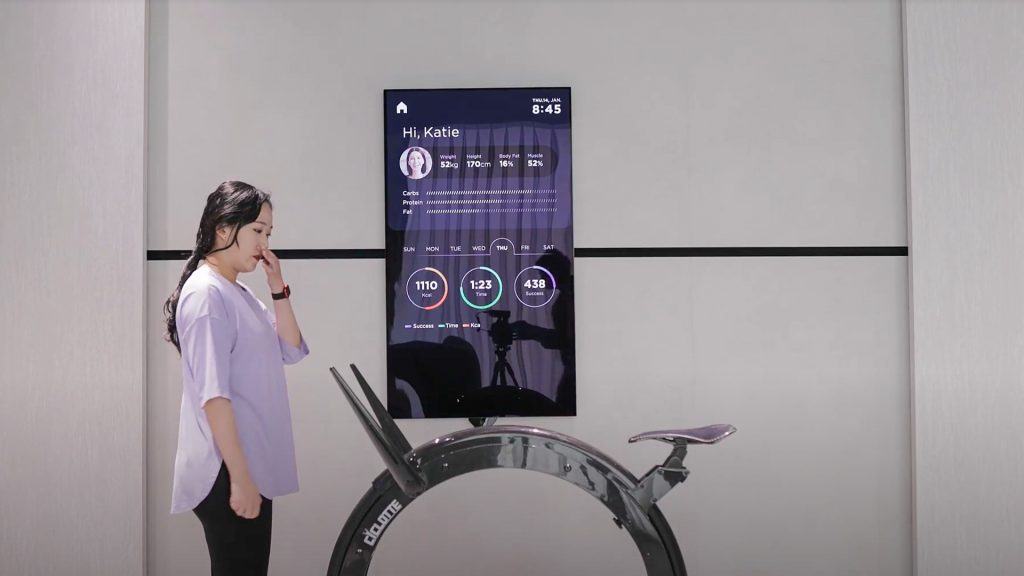 The lockdown in wake of Coronavirus pandemic resulted inclosure of public places like gyms and that is when most of us ended up performing the fitness sessions in our living rooms and bedrooms. But for the perfect training, people started watching a number of video-based exercises. Performing the exercises while watching the videos on a small display is not really a pleasing way to do, and that is one of the reason LG has created its 55-inch Rail and Pivot OLED displays. This display sits on a rail system and can slide itself out from a hidden position to multiple angles in your home.

LG shows off the display hidden behind the way that slides itself allowing people to use it. The display is also provided with some pivoting capabilities, as most of the workouts people watch are through third-party applications. By moving the display to the portrait orientation, it can be much convenient. 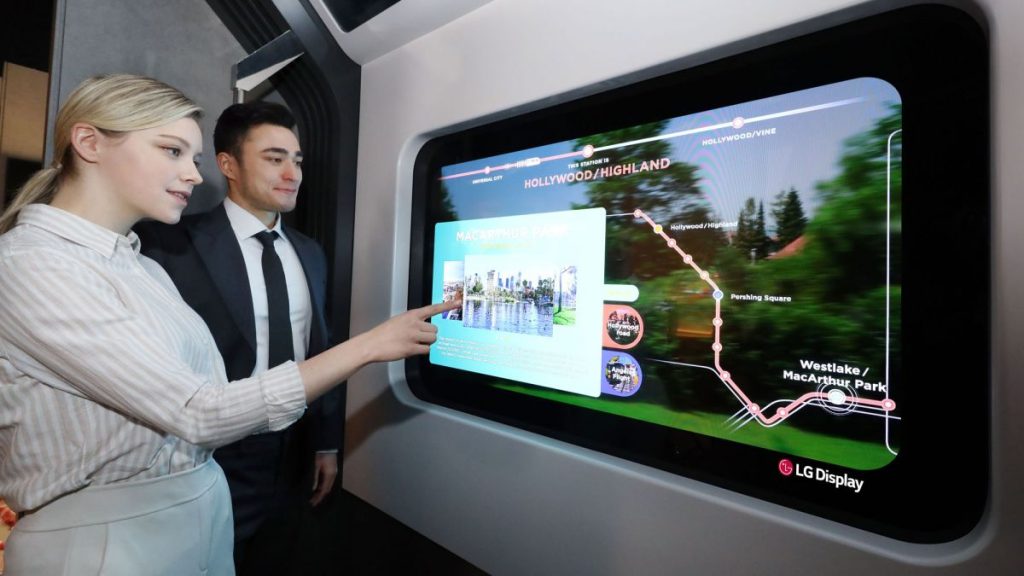 This particular display is made to used for the public utility primarily. This 55-inch transparent OLED was showcased as being used on a subway displaying the transit information and routes along with various other required information such as current time and the location. LG says that the transparent properties of this OLED display will allow the passengers to enjoy the locations and passing scenes in the city  and receiving all the required information at the same time.

This makes travelling pretty convenient as you need not keep on checking your watch for time or phone for the location or any other information for that matter. The way LG portrayed this is so cool, I mean, it does not obstruct the scenes through the window but still provides all the required info. 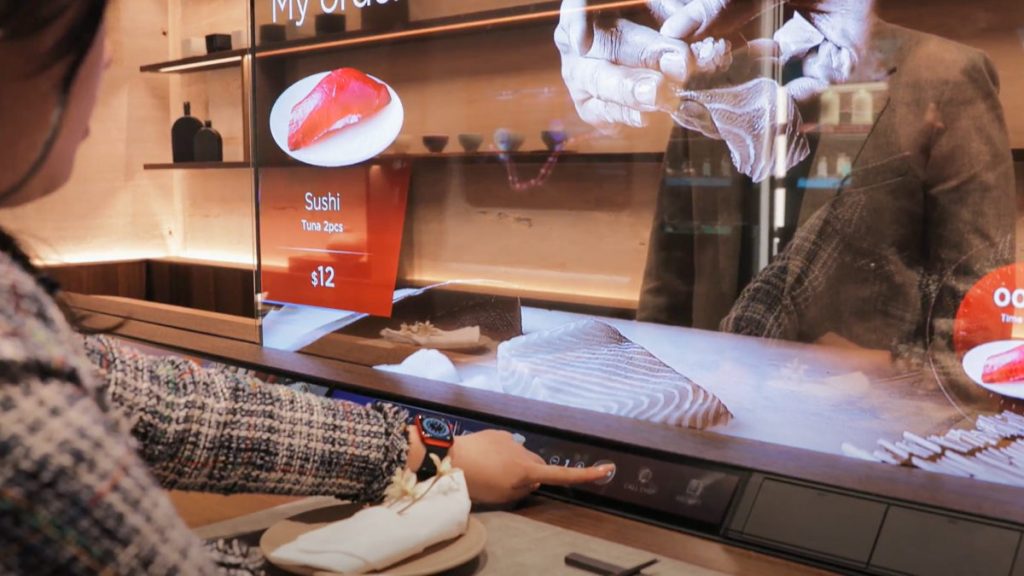 Technologies in the hotel service industry are merely left untouched for years now and finally LG Display has decided to change the story for the industry. LG showed off what the future restaurants could look like with a large 55-inch OLED and 23.1-inch in-Touch Strech Display. In the demo, customers sit in front of a large 55-inch display which is transparent. The display here shows various menu items and even sports and games. In the demo, the chef cooks the food just behind the display and the customers can communicate with the chef whenever needed. Also there is an elongated touch screen just below the display and that allows the customers to make purchases, choose what to watch, and even can be used to call the chef.

If this display makes its way out of the prototype world this will end up being a revolutionary product in the hotel industry. This allows for an instant check-ins, digital order taking, reduce the contact, and a lot more. 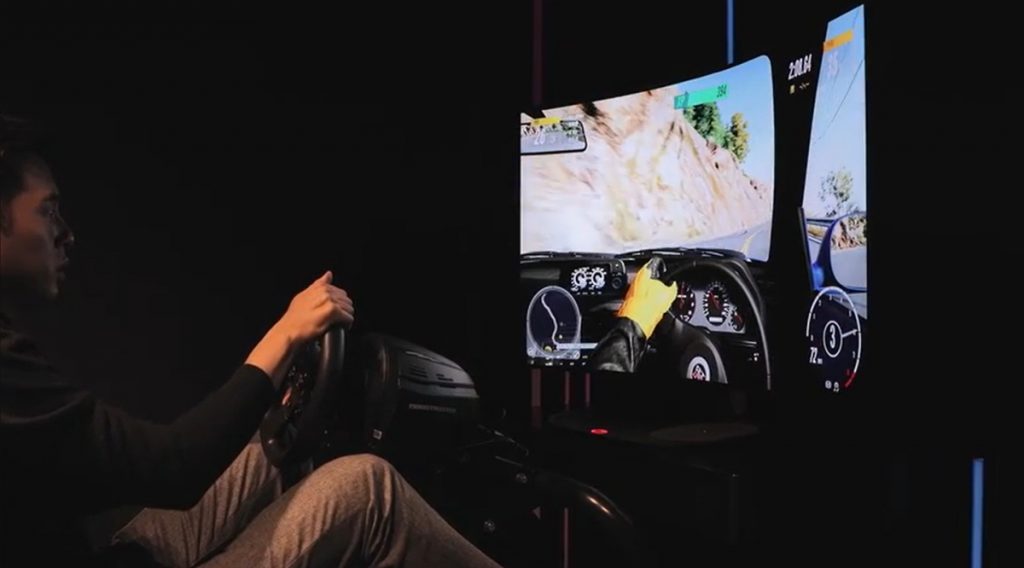 LG Display continued their show by showing off their next product which is a bendable OLED display that can bend to a radius of 1000mm, meaning you can use it a flat orientation when watching content and bend it to a curved shape which playing racing titles like Forza and etc. Not only that, this display comes with a variable refresh rate ranging between 40 Hz to 120 Hz. Just like a few LG devices from the past, the display vibrates in such a way that it produces sound. Now, this means you do not need any additions speakers.

This is not the first time we are seeing a bendable display with similar concepts. But this particular display is far thinner at just 6mm whereas the previous generation came with a 9mm thickness. The ability to bend and straighten up whenever needed plus the addition of in-display speaker makes this a best gaming display for the gamers. 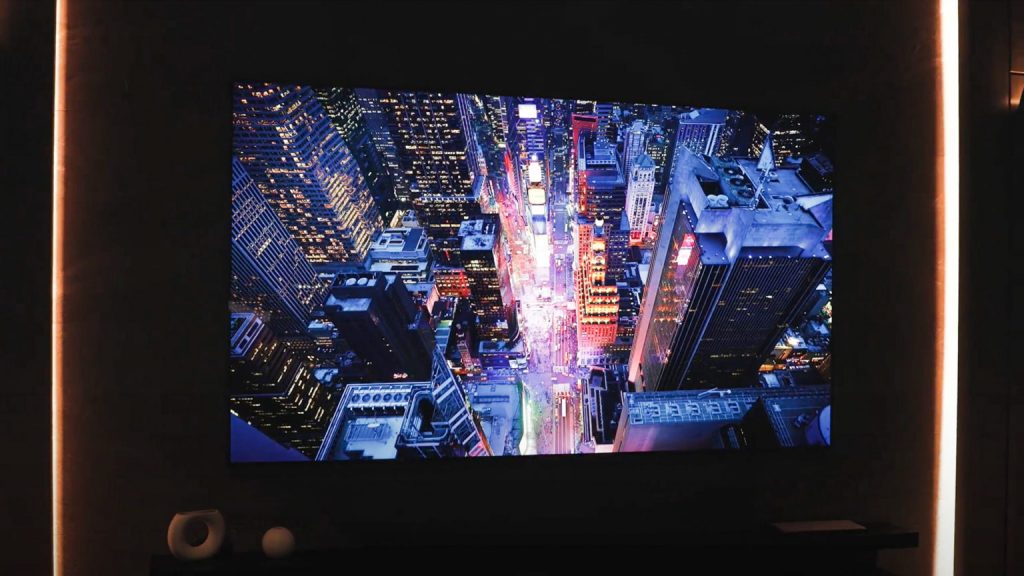 This is the last concept that LG Display has showcased and it as an 88-inch 8K Cinematic OLED display. While most of us are missing some theatre level fun due to the rise of pandemic, this display might can fix that. This display is mainly targetted at home theatre setups and it also adds in a similar vibration to produce sounds feature, just like the 48-inch Bendable Cinematic Sound OLED Gaming TV. LG Display has been showing off 8K TV’s at CES for a couple of years now and this is the most thinnest model we have come across so far. But once it comes out people might need to get either a sound bar or theatre speaker setup as the vibration does not really a great or enjoyable audio experience.

This is our take on LG Display’s new OLED concepts from the CES 2021. As of now, we do not have any information around the possible prices or the launch dates of these display. It is possible that some of the models may not make their way to the real world just yet! For more latest announced from CES, stay tuned!