Oppo A53 2020 Version To Be Launched Soon, Specifications Leaked!

Oppo released the Oppo A53 smartphone back in 2015.  The company is now gearing up to launch a new 2020 version of the smartphone with better specifications and design, well, at least a new leak making rounds on the internet says so. 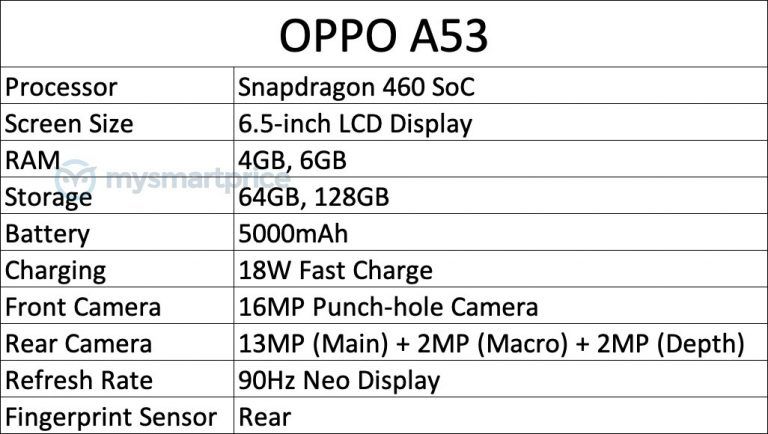 According to a new report from MySmartPrice, the Oppo A53 2020 is going to be launched soon, and its specifications have been leaked. The phone will be powered by Qualcomm’s latest entry-level Snapdragon 460 SoC, paired with 4/6GB RAM and 64/124GB internal storage. On the front, it will sport a 6.5-inch LCD display with a refresh rate of 90Hz. There will be a cut-out on the top to house a 16MP punch-hole camera. Talking about the rear cameras, we’ll see a triple camera setup with a 13MP main sensor, 2MP depth sensor, and a 2MP macro lens. The phone will get its juice from a big 5000mAh battery that’ll charge fast, thanks to the 18W fast charging support. The fingerprint sensor will be placed on the back.

A few days back, the Oppo A53 also appeared on various certification websites including BIS, NBTC, FCC, EEC, TKDN, and Indonesian Telecom. This means the smartphone can be expected to be released in India, Thailand, Indonesia, and some European markets. No images or renders of the phone have been leaked yet, and the pricing also still remains a mystery.