Samsung is one of the companies that have been the closest rival of Apple for years and we see products from Samsung that are the best alternatives to Apple’s offerings year after year. As far as Apple is concerned, the company released its first pair of truly wireless earbuds called the Apple AirPods a few years ago.

And it is still a fact after many years that Apple AirPods have been the best-selling truly wireless earbuds. However, Samsung has also tried the best it can to launch alternatives to Apple AirPods for Android users by launching its Galaxy Buds.

According to a new report, we are going to see Samsung launch its next generation of Galaxy Buds very soon. And as per the leaked renders, Samsung is taking a radically new approach in design compared to anything we have at present in the market.

The next Samsung Galaxy Buds will have a “bean” shape which will help in comfortably fitting inside the ears and not popping out every hour for us to adjust them back in. Apple’s AirPods also faced this problem which is why Apple announced AirPods Pro with rubber tips to make them sit inside ears for longer hours.

While Samsung’s approach is unique, the new Galaxy Buds will also be drastically smaller than the Apple AirPods Pro or anything else in the market. They are said to be under 1-inch in length and they have been designed keeping in mind the natural curvature of a human ear. 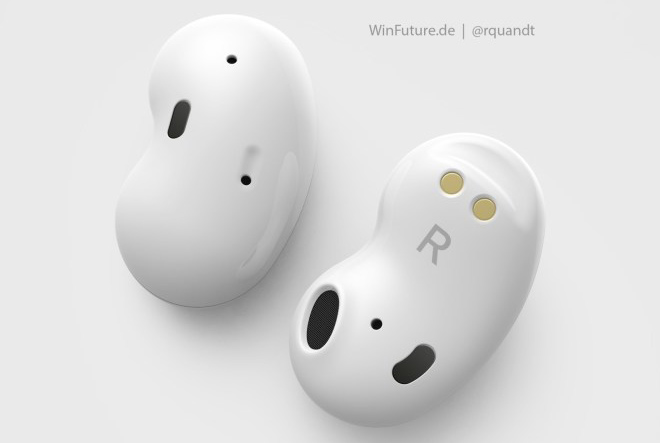 However, this design also has a caveat where the sealing of ears will not be as much as the other earbuds meaning that the natural blocking of outer noise will be not as much. This might mean that the Samsung Galaxy Buds might not have noise cancellation as seen on AirPods Pro. Also, the Galaxy Buds have charging pins on each side meaning they can be wirelessly charged in a case or otherwise.

Also, the report from Winfuture mentions that two speakers will be there on the Galaxy Buds for better sound quality and it will support auto-play and auto-pause functionality which have become standard on every other truly wireless earbuds.

Winfuture’s Roland Quandt says that these Galaxy Buds are still in validation testing and we might see them launch with the Galaxy Note 20 series from Samsung in the second half of this year.