After Samsung Galaxy S10 Lite made highlights on the internet, it turns out the South Korean giant is working on another Lite smartphone as well. I am talking about Samsung Galaxy Note 10 Lite that recently appeared on Geekbench listing under the model number SM-N770F and it is speculated to arrive sometime next month.

According to the listing that was formerly discovered by 91Mobiles, the SM-N770F scores 667 points and 2,030 points on single and multi-core tests respectively. The Geekbench listing provides a much-needed frame of specifications that could help us understand what the device will bring on-board. 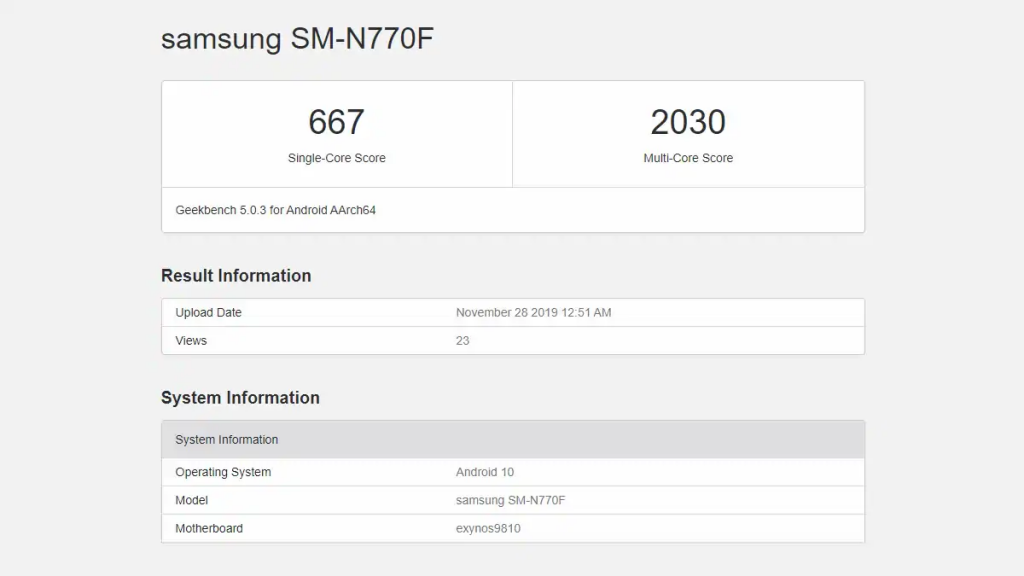 As per the Geekbench listing, the device is equipped with a 2018 flagship Exynos 9810 chipset that was integrated with Samsung Galaxy Note 9 and Samsung Galaxy 9 series last year. This year, Samsung is planning to reprise its roll with a base frequency of 1.79GHz paired along with a 6GB RAM that will be mounted on Samsung Galaxy Note 10 Lite that should be enough to prove its caliber.

Furthermore, as NDTV Gadgets360 puts it, Samsung usually launches two variants of the same phone i.e. one with an Exynos SoC and another with a Qualcomm chipset. The listing also had information that the device will come with Android 10 out-of-the-box so that will be amazing since it is just now that Galaxy S10 and Note10 series are getting their share of upgrade customized with One UI 2.0

Samsung is also working on Samsung Galaxy S10 Lite bearing model number SM-G770F which is likely to get Snapdragon 855 SoC on-board although that remains to be confirmed yet.

Finally, both Galaxy S10 Lite and Galaxy Note 10 Lite along with Galaxy A91 is speculated to launch next month i.e. in December 2019 when there are a bunch of other smartphones in the queue to launch including from Xiaomi, Huawei, Motorola, etc.