Bitdefender offers outstanding protection with its 100% virus and malware removal score in our testing. It offers several good and useful perks and additional security features, (apart from some questionable “features” or gimmicks) that provide really good value for money. However, that’s it for this review, hope you enjoyed reading it. Feel free to let us know in the comments if we should review more antivirus apps or software, or anything else you wish to see covered on TrueTech!

Protecting your computer and your online identity has become progressively vital these days. Gone are the days when Macs used to be less vulnerable to viruses and malware, today, every device is equally at risk while browsing the internet, transferring files or downloading email attachments. Regardless of the operating system of your computer, an antivirus is an essential piece of software that you should install. Amidst the hundreds of antivirus offerings, we have tested one of the well-known options. We have worked with Bitdefender this time to review their offering of Antivirus for Mac, and we present our detailed analysis and review for you. Please note that the provision of a free license does not affect our opinions or views in any manner whatsoever. 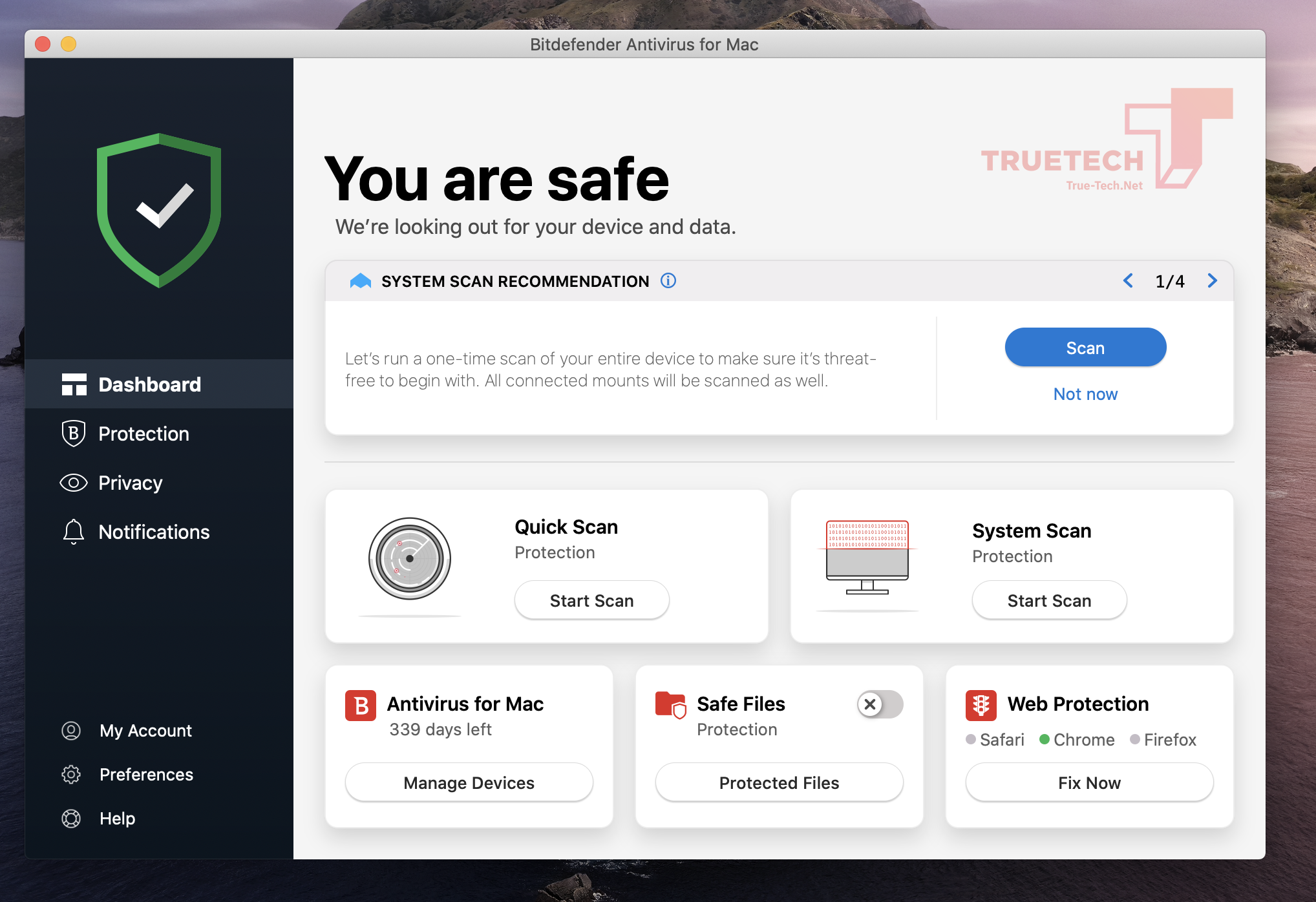 Bitdefender offers an intuitive and easy download and setup experience. it also offers a straightforward installation process, followed by a small step to activate the license. Furthermore, it also provides a comprehensive guide to the functionality of the antivirus software as well as the authorization of all the necessary kernel modules, which in turn enable the always-on malware protection (through the full disk access that you provide). 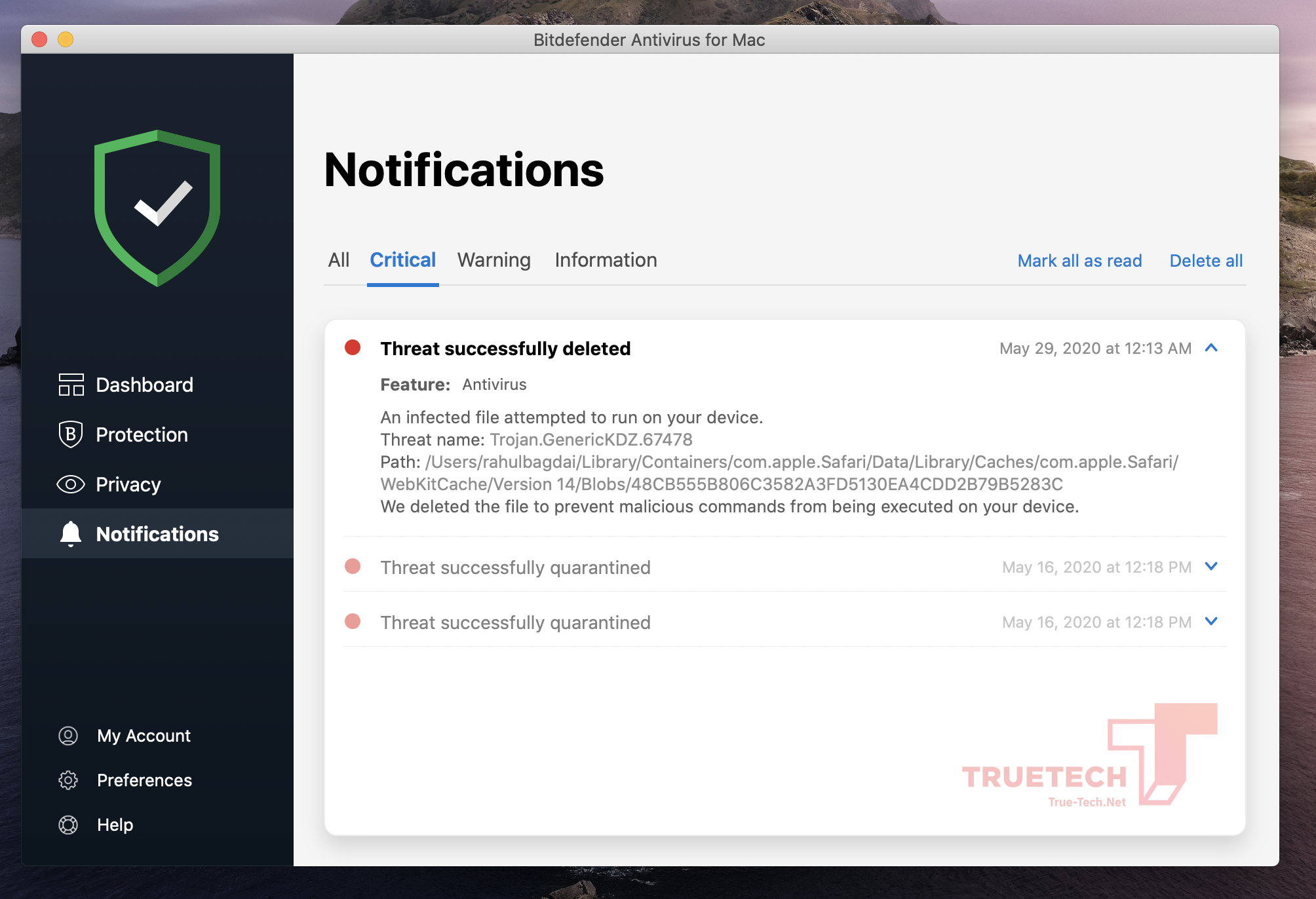 Bitdefender’s antivirus for Mac greets you with a user-friendly, minimal software screen, which reads “you are safe” once the installation finishes. This declaration was of course the result of the first quick scan the software performs during the installation process, however, the software also says you should run a full scan to “ensure” whether the computer is totally safe or “threat-free”. Which is a little concerning, given it makes the first “you are safe” declaration a little deceiving. Nonetheless, to test the effectiveness, a full scan was also performed.

The initial full scan lasted for 2 hours. If you run another full scan consequently, you can expect it to finish within 5 to 10 minutes. It seems Bitdefender seems to identify files that were safe before and weren’t changed in any manner whatsoever, therefore, it avoids scanning them again.

However, at TrueTech we wanted to test how long does it take on an average, so we ran multiple fresh tests to identify how long the software usually takes to finish a full scan. On an average, we noticed that the antivirus takes about 40 minutes to as much as 2 hours 45 minutes to if after file changes are made, depending on the hardware of your Mac or the MacOS version you run. Whilst we lack any comparison, our free version of Avira antivirus for Mac took about an hour to 1 hour and 40 minutes maximum. 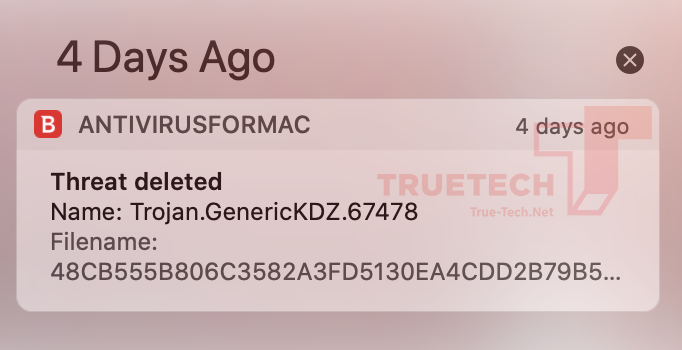 Apart from the scan times, we wanted to make sure the scans are performed effectively. We gathered some of the most common malware and let them loose onto a virtual Mac machine we set up to test the software. This group of malware contained over 20+ different types of infected files and threats for the antivirus to detect. Furthermore, a USB stick and a disk image (DMG) were placed in the same field with malware on them. We also visited malware infected websites to check the vulnerability of the software.

To our surprise Bitdefender not only detected and removed all the viruses and malware from the Mac, but also managed to unmount the disk image. the antivirus app also stopped the infected websites from downloading the threats and viruses and in background. However, the USB somehow failed to detect for the first two times – we are unsure whether this was due to the antivirus or the misconfiguration of the virtual machine (which tried our best to ensure was configured correctly). However, on the third try, the USB was detected and also unmounted due to the presence of the malware. This gives the Bitdefender a 100% score for removing the malware. 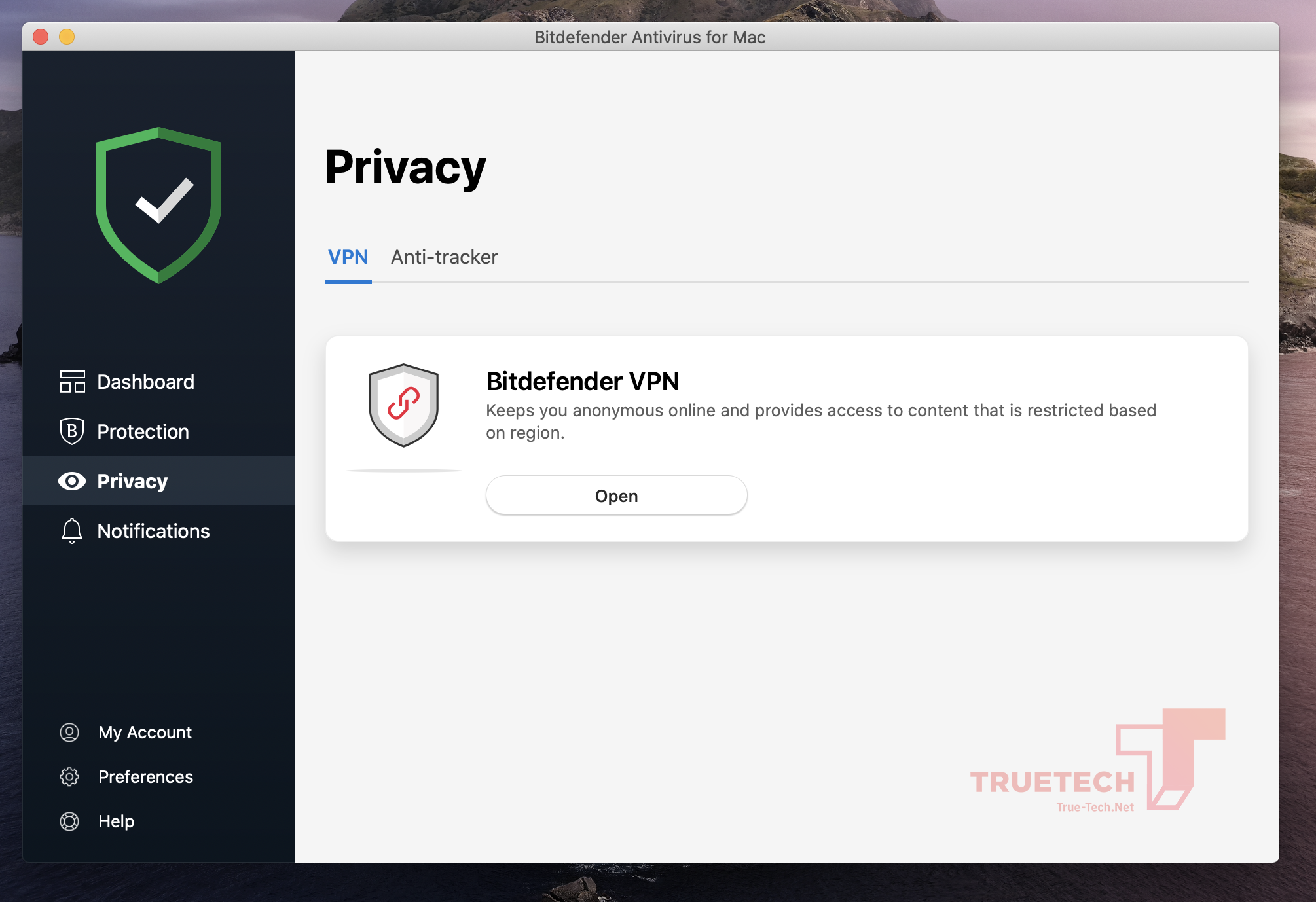 The Bitdefender antivirus for Mac is a package deal. It has several security features and perks bundled up its sleeves. The very first perk it comes packed with is a VPN add-on, which is co-serviced by the well-known HotSpot Shield VPN. Whilst this is a good add-on, it is a skimmed version of the premium VPN Bitdefender offers (which runs at about $3 to $4 per month during the time this review was written).

However, this skimmed version of the Bitdefender VPN is only usable for a short duration should you choose to work at a restaurant, café or any public internet space per se, since it only offers about 200MB of bandwidth per day, for every device. Furthermore, the functionality is limited to connecting and disconnecting the VPN, you aren’t allowed to pick a location of your choice. The app also lacks typical VPN features like kill switch and DNS settings. 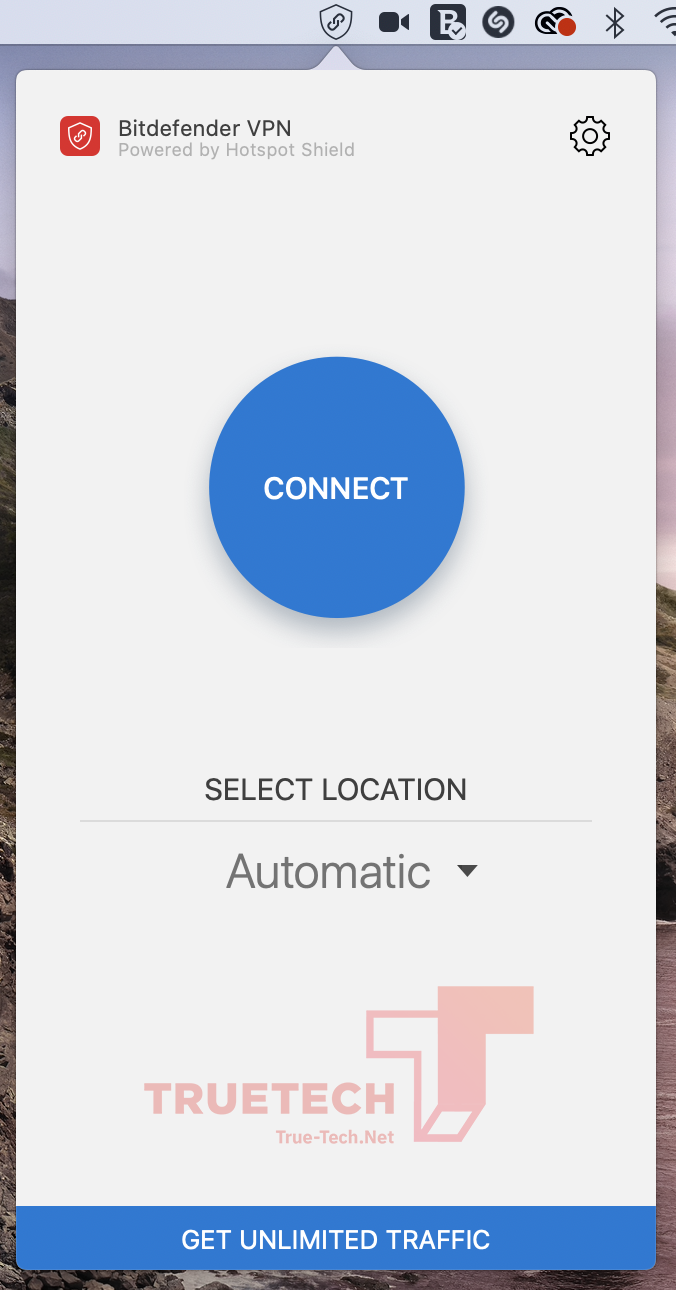 Bitdefender also offers a Safe Files feature, which secures and encrypts all your files and folders including your Desktop, Downloads, Pictures, Videos etc. disallowing any unauthorized third party app to access it behind your back or without your permission. If any such app makes an attempt to access or make changes to a protected file on your computer, you will be informed with a pop-up warning where you can choose whether to allow the app to do so or no. However, you can still move an app you trust to whitelist so that the antivirus doesn’t bug you with continuous notices.

Furthermore, Safe Files protects any files from getting corrupted or locked by ransomware. This feature adds the most common apps like Google Chrome or Microsoft Office apps to the whitelist by default. However, it should be noted that the Safe Files feature is not turned on by default after installing Bitdefender.

Bitdefender also offers browser extensions for Safari and Chrome that enable users to identify whether a website is safe or not. The app adds graphics to Google search results (which is anyway driven by icons and smaller graphics), which sometimes makes the experience confusing. The browser extension also enlists the trackers a website maybe using, however, it seems not all the trackers were actually blocked. This perk, although interesting, seems more like a gimmick.

Apart from that, MacWorld noted that there’s an adware-like feature that sends pop-up notifications about “special offers” and deals to users that are subscribed for it. Just like them, we were equally bewildered by an adware presence in an antivirus software. Nonetheless, after a conversation between BitDefender and MacWorld, it seems the feature is meant to advertise renewal offers (closer to expiration) and sales based on what kind of subscription a user has purchased (which still seems like an adware). However, this feature can be turned off by going to the app’s preferences dialog.

Bitdefender offers outstanding protection with its 100% virus and malware removal score in our testing. It offers several good and useful perks and additional security features, (apart from some questionable “features” or gimmicks) that provide really good value for money. However, that’s it for this review, hope you enjoyed reading it. Feel free to let us know in the comments if we should review more antivirus apps or software, or anything else you wish to see covered on TrueTech! 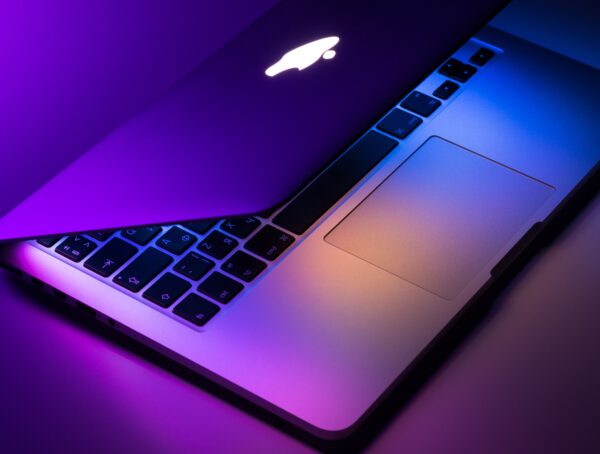 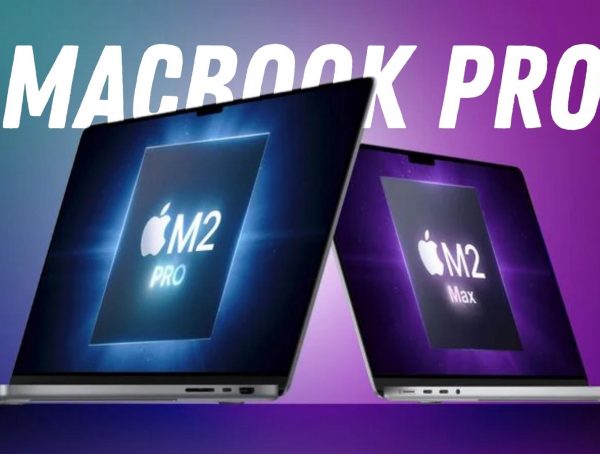 Apple Featured
MacBook Pros with M2 Pro and M2 Max chips are under development, might debut this year 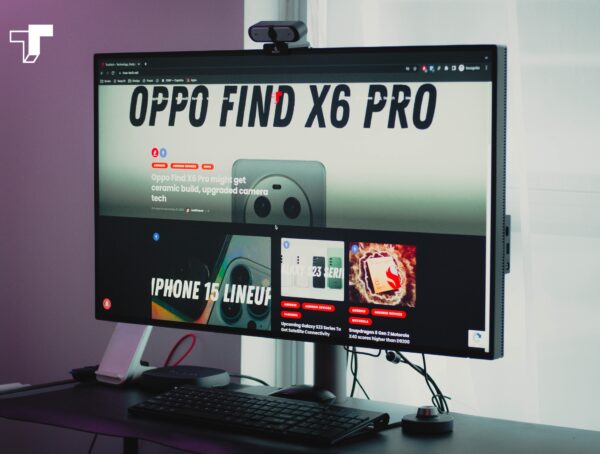 BenQ DesignVue PD3220U Monitor Review: Sure Stunner For The Creatives

This coverage was brought to you by BenQ, who sponsored the review of the product. However, thoughts and opinions presented … 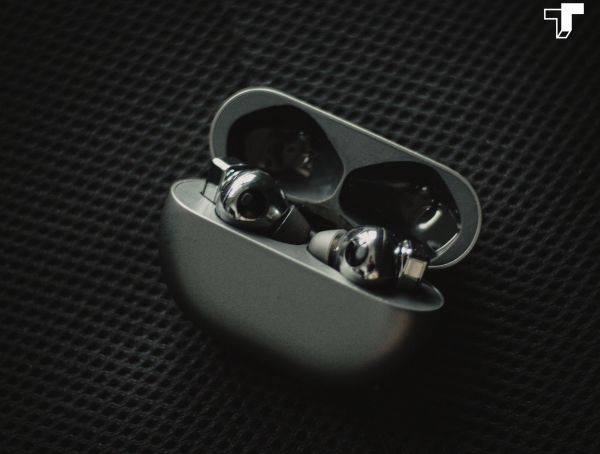 Huawei has made the impressive transition from a smartphone production company towards an all-inclusive electronics giant. From wearables to speakers … 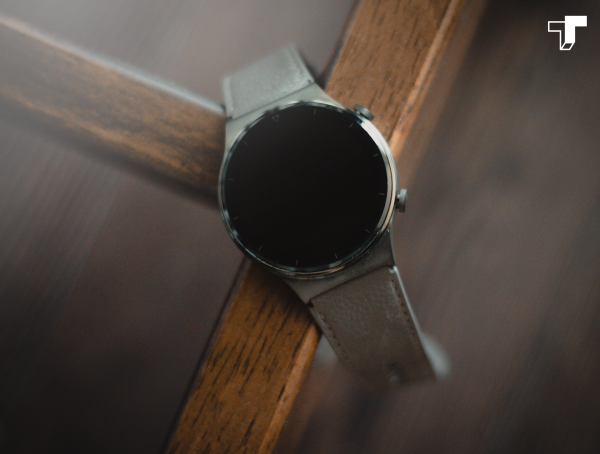 When Huawei bid farewell to Google’s Wear OS and turned over the new leaf with its Watch GT, there were …