Games are freely available on Google Play Store for Android smartphones and with billions of devices already shipped, people cling to various games for entertainment purposes. Some people cling to a certain set of games while some hunt for exciting games from the app aggregator. I know it will be a tiring job just to search for exciting games available for download since there are millions of games available. So, we at TrueTech have curated a list of Top 10 Best Android Games March 2020 that you must try. 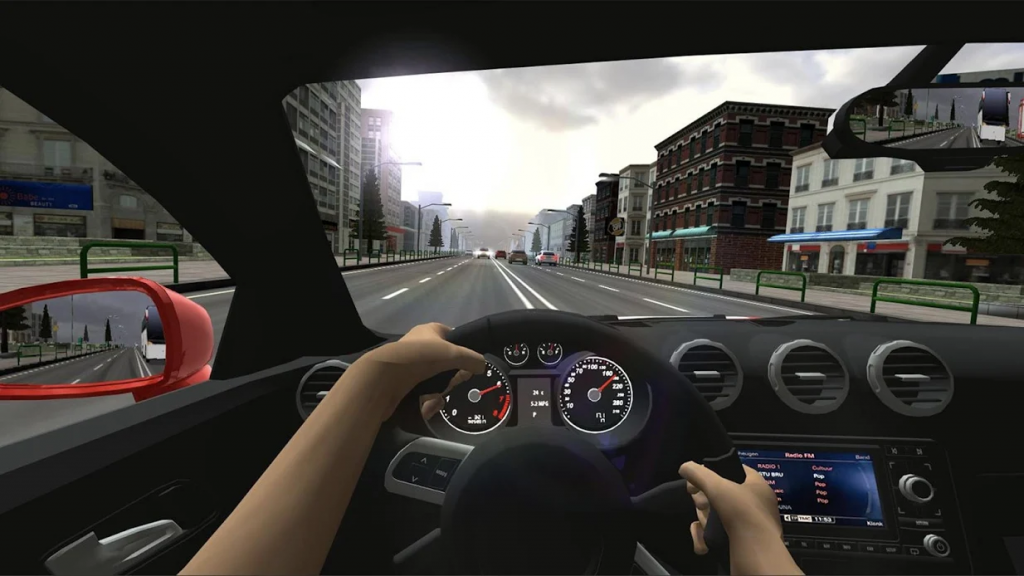 Download QR-Code
Racing Limits
Developer: SBK Games
Price: Free+
Check out this infinite arcade type car racing game with no limits. You are tasked with riding your vehicle by accelerating and decelerating it through traffic beating all the obstacles and roaring towards scoring the highest scores you can grab on a single try. The game offers a minimalistic graphics on-board on its fixed view arcade game that also includes a stunning real-time multiplayer mode. You can switch between camera angles with a very sensitive control over zooming your car against the traffic and yes, the game takes driving physics into perspective for an overall enhanced gaming experience. 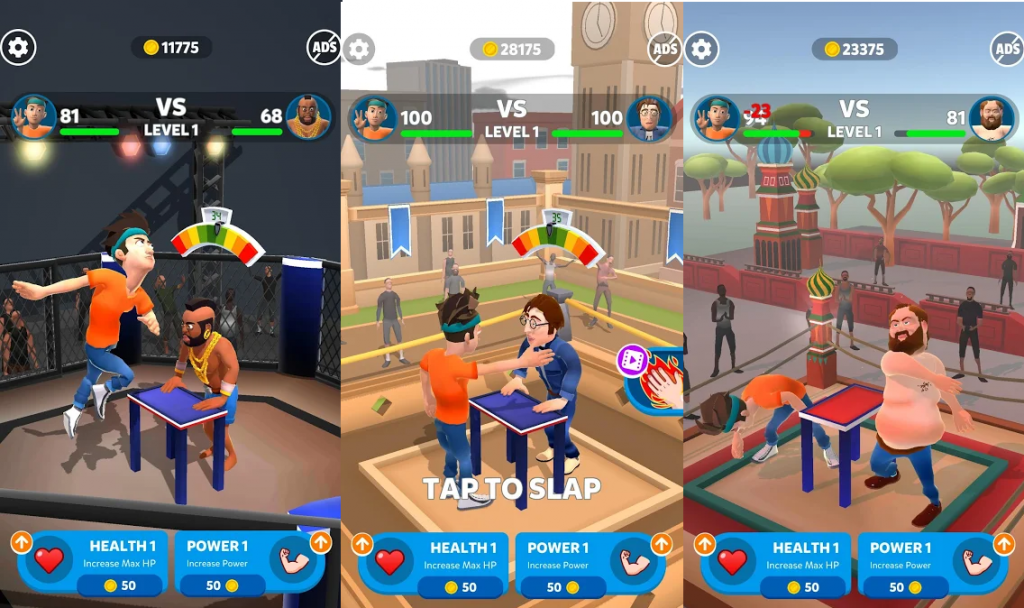 Download QR-Code
Slap Kings
Developer: Lion Studios
Price: Free+
As funny as it may sound, the game helps you calm down. Instead of slapping someone in real life which could end up bad, Slap Kings gives you a virtual outlet to channel your anger and slap the shit out of your opponent. You are in a ring with an opponent where you are tasked with raising the bar to slap the opponent as hard as you can to view the challenge and more forward in the game. The only downgrade are the unskippable 10-seconds long ads that keep popping up whenever you complete a round and progress to the next but hey, it is worth it since you just hit someone so hard that he saw stars out of pain.

3. Game of Throne Beyond The Wall 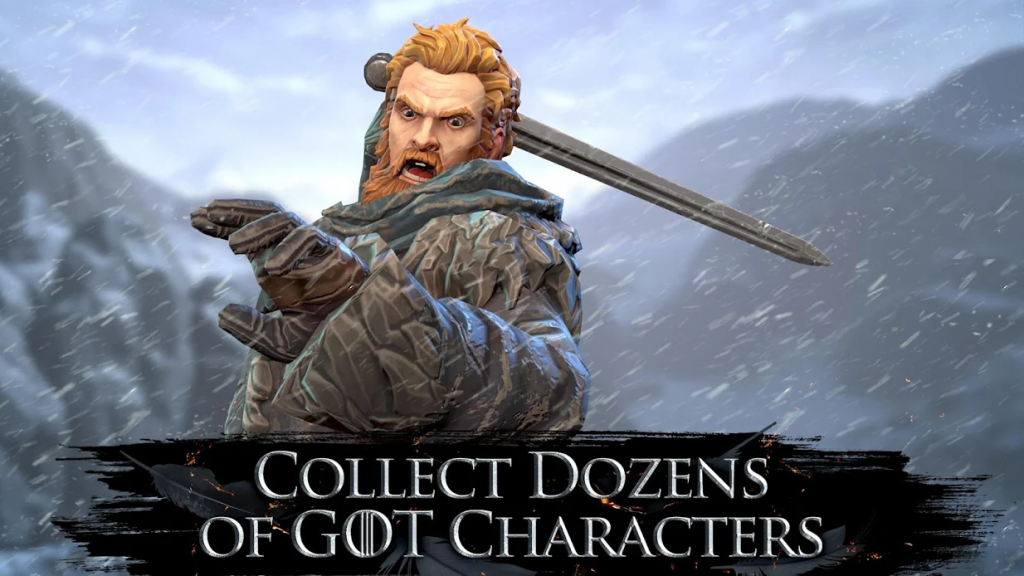 Download QR-Code
Game of Thrones Jenseits der Mauer
Developer: Behaviour Interactive
Price: Free+
The wait is finally over. After a decade of watching Jon Snow and other characters on the popular TV series GoT, it’s a dream to live their lives and this game grants your wish to become Jon Snow or Daenerys Targaryen with the power of Weirwood trees. The game is set 48 years before the events of GoT the TV Series took place where you are taking the place of Lord Commander Brynden Rivers beyond the wall who disappeared suddenly. Send your ravens across the map to gain points, unlock characters and more with this game available on Android smartphones as pre-register at this moment. 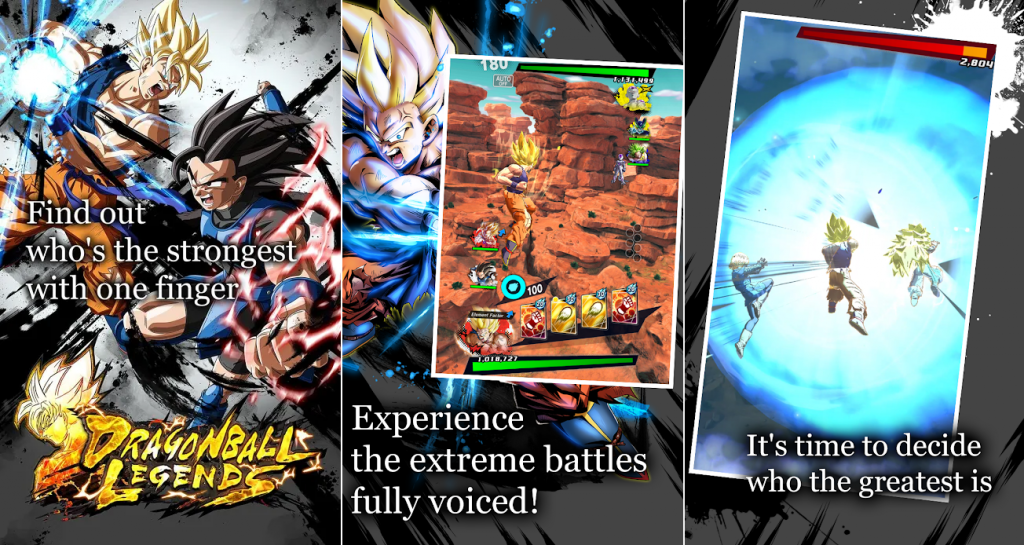 Download QR-Code
DRAGON BALL LEGENDS
Developer: BANDAI NAMCO Entertainment Inc.
Price: Free+
For all those anime fans, Dragon Ball Z has been a wholesome ride of ups and downs in the life of Goku and other characters. Dragon Ball Legends brings the original storyline in this game allowing users to practice moves and fight the battle against other anime characters from the original anime series. With 3D stages, excellent background score, the game offers everything from excelling moves to powering up when needed to outsmart the opponents. It offers spontaneous fight moves with real-time clashes, combos that you battle to win big in this new adventure in the Dragon Ball Z storyline. 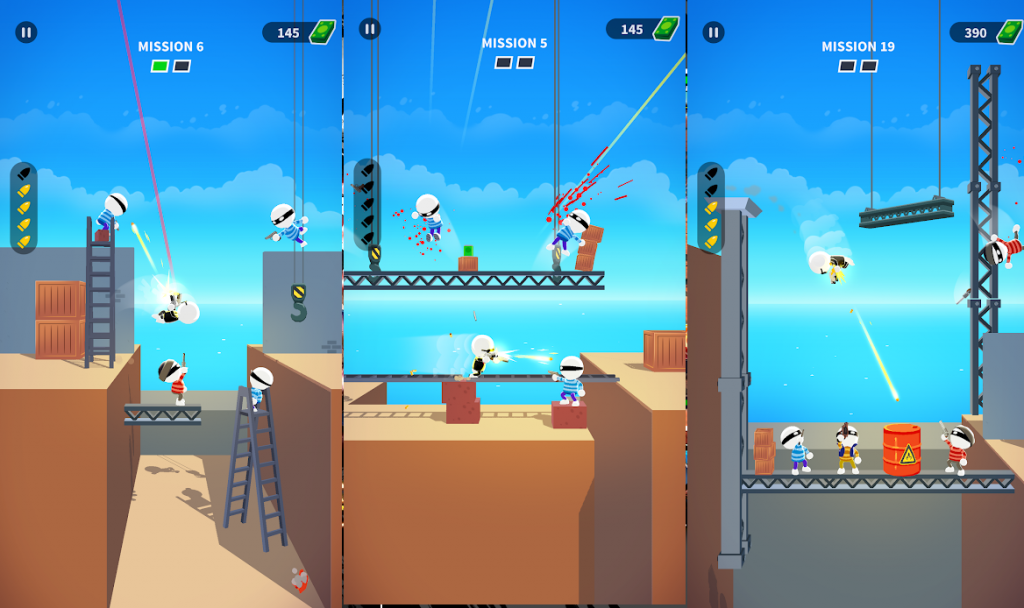 Download QR-Code
Johnny Trigger - Erstaunliches Schießt Spiel
Developer: SayGames
Price: Free+
If you ever played games like Vector, you will love Johnny Trigger for sure. Although not as shadowy as Vector, this game is plugged with an immersive and colorful interface where you as the protagonist is hurtling across the map in an engaging storyline. You are tasked with beating the bad guys in a James Bond-style slow motion with stimulating outfits, extrinsic moves, style and more. You can upgrade your arsenal as well as outfits to hurtle through the chapters unlocking one-by-one to win big. Although an intriguing game, it is challenging enough while maintaining the utmost simplicity that would keep you glued to the game no matter what. 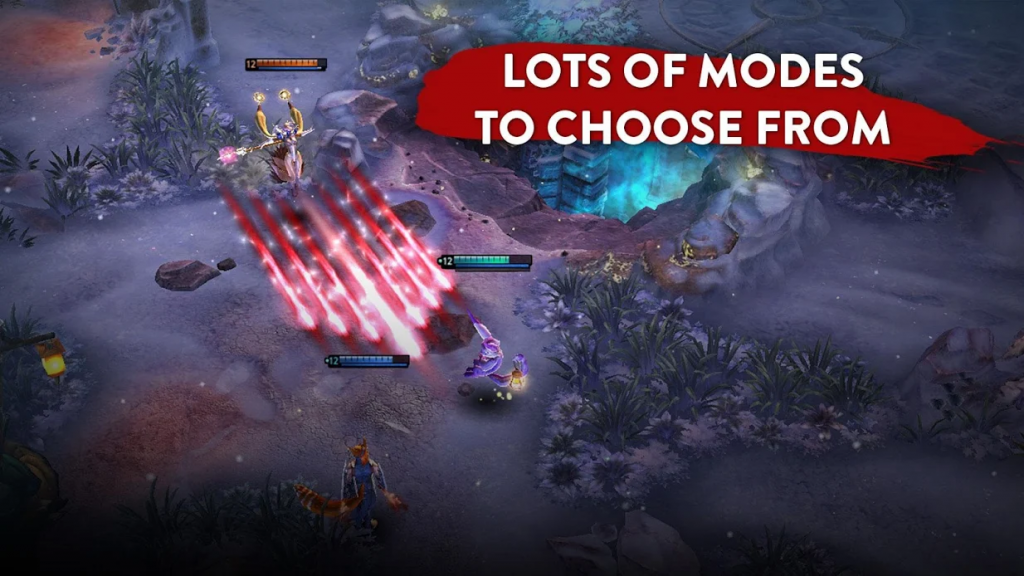 The app was not found in the store. 🙁
Go to store Google websearch
Undoubtedly one of the best cross-platform free-to-play MOBA games on Android, Vainglory keeps you glued to its epic storyline filled with strategic depth and mechanics required to combat the opponent’s team and win big. You can play with your friends against others or a team of bots if you want. The game offers precise moves and controls plugged with incredible graphics and gameplay making it one of the best MOBA games I have played on Android so far. To put things into perspective, it is much like I am playing on a PC thanks to its detailed gaming experience. 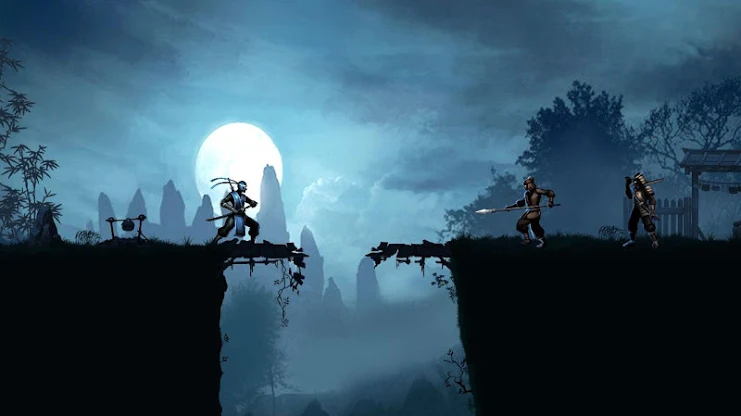 The app was not found in the store. 🙁
Go to store Google websearch
From the creators of Shadow Fighter, Ninja Warrior is an interesting game where you are tasked with fighting the evil forces to rescue the captives. You have superhuman skills to combat the rivals who are also trained ninjas so you better watch out and keep your best moves ready to combat anyone who might come in your way towards rescuing the captives. The game has stunning graphics and mechanics towards fighting moves, the character is super easy to use combined with an epic showdown of sound that keeps you glued to the 3 maps and 45 levels of the game for sure. 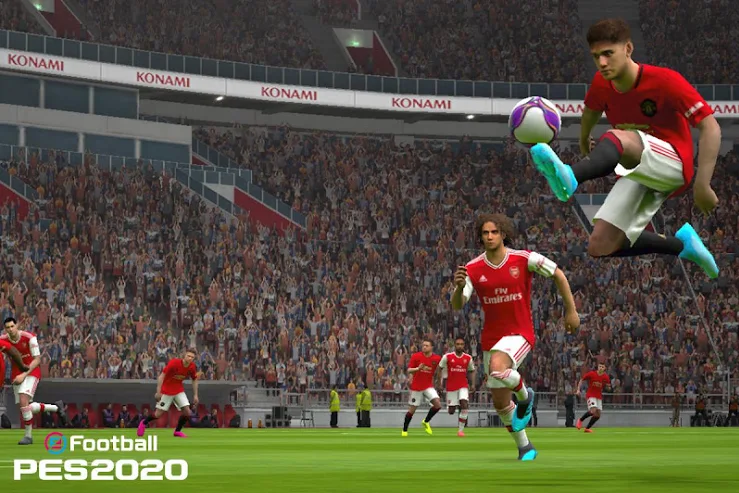 Download QR-Code
eFootball PES 2021
Developer: KONAMI
Price: Free+
Unleash the skills within you to play the much-intriguing game of football. With eFootball PES 2020, an online game with 1.6GB size, the game has everything you need for a stunning gaming experience. The game does preserve the thrill of gaming on a console and distills it to work flawlessly on a smartphone as you don’t need flagship devices but a stable internet to play it. The game offers online real-time matches that you can play against your friends and opponents, add new items from the shop and more. 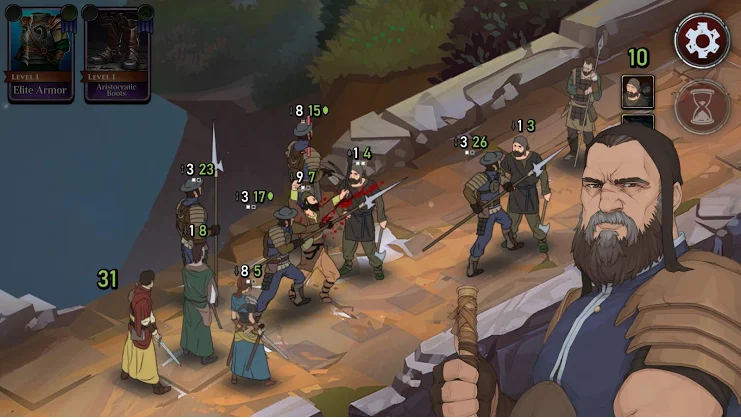 The app was not found in the store. 🙁
Go to store Google websearch
Ash of Gods is a strategy-based game and is a prequel to Ash of Gods: Redemption. The game focuses mainly on an upcoming war on the world of Terminum where you are tasked with raising your army, hire and train them to combat the upcoming threat. You can use magic cards that you’ll find on the way to strengthen the army against intruders & rival army. It offers PvP mode and 24 story mode battles that you can play with three difficulty levels and more. The game will surely keep you entertained for a long time so give it a try. 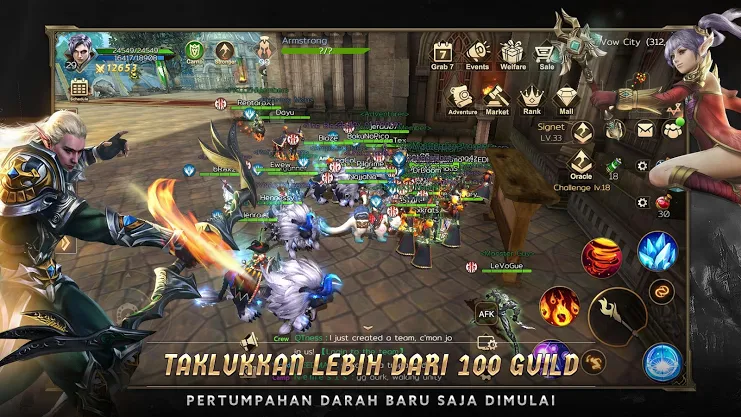 Register QR-Code
Rise of Nowlin
Developer: Dunia Games
Price: To be announced
If you are a fan of MMORPG games, Rise of Nowline will truly blow your mind. The game has given classes to choose from and lets you select whether to be a good guy or a bad guy in its epic showdown of a battle against opponents. The developers have paid close attention to every detail which makes it a happening MMORPG game with amazing adventures and more. The graphics are pretty awesome and the game has a rich background story that takes you forward in its PVP and PVE gameplay so don’t miss the opportunity to try it out.
#Android#best android games#Games