Huawei Ban to Last Another Year, No Trading With US Companies Till Then

A year after Huawei Ban was enacted, the Trump Administration has re-enacted the Executive Order banning Huawei from doing business with any firm based in the US. The order will stay in action for the next year as pe the order. The order also bans Google’s Android from supporting Huawei smartphones. Huawei has been running Android for years even after the ban was enacted although without any Google apps and services called Google Mobile Services.

This means Huawei & Honor phones can still use Android as their operating system since it is an open-source OS but it won’t be backed with GMS for at least till next May. This is where Huawei Mobile Services (HMS) comes into play. Introduced back in March, HMS is a replacement to GMS and already has over 1.3 million developers on-board along with 400 million active users. 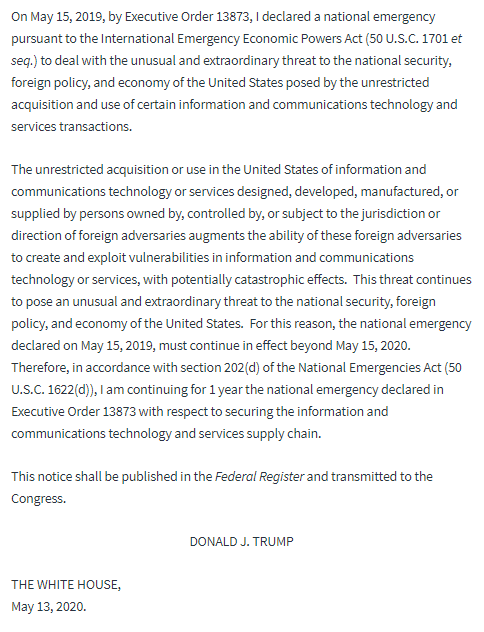 According to the order, the ban on the entity list was extended due to its threat to national security. It is also to stop unrestricted use of information and communication technologies and services from the companies that are in the entity list which includes Huawei as well. Thus, the national emergency that was declared on May 15, 2019, has been extended for a period of one year i.e. till May 15, 2021. Note that this also includes other U.S. based companies trading with Huawei and other companies enlisted by the Trump Administration.

Huawei shall continue to roll out phones with Android OS and HMS. The company is also rumored to have engineered an in-house Harmony OS although it is clouded in many rumors and thus, there is no word on its actual departure on smartphones as of now.