One of the highly anticipated smartphones of 2018 is the OnePlus 6 which should be out in a couple of months. A recent leak had suggested the price of the device while revealing some basic specifications. This new leak gives us a better look at the OnePlus 6’s specifications including the display resolution, battery capacity, and its dimensions.

First off, the OnePlus flagship for 2018 carries the model number A6000, which is similar to most of the OnePlus devices. As opposed to the previous suspect of including a higher-resolution display, OnePlus will be using a 6.28-inch AMOLED panel with an FHD+ resolution of 2280 x 1080 pixels, according to the leak. The said display resolution is in 19:9 aspect ratio, which is similar to many of the recently announced Android smartphones with a notch, notably OPPO R15. 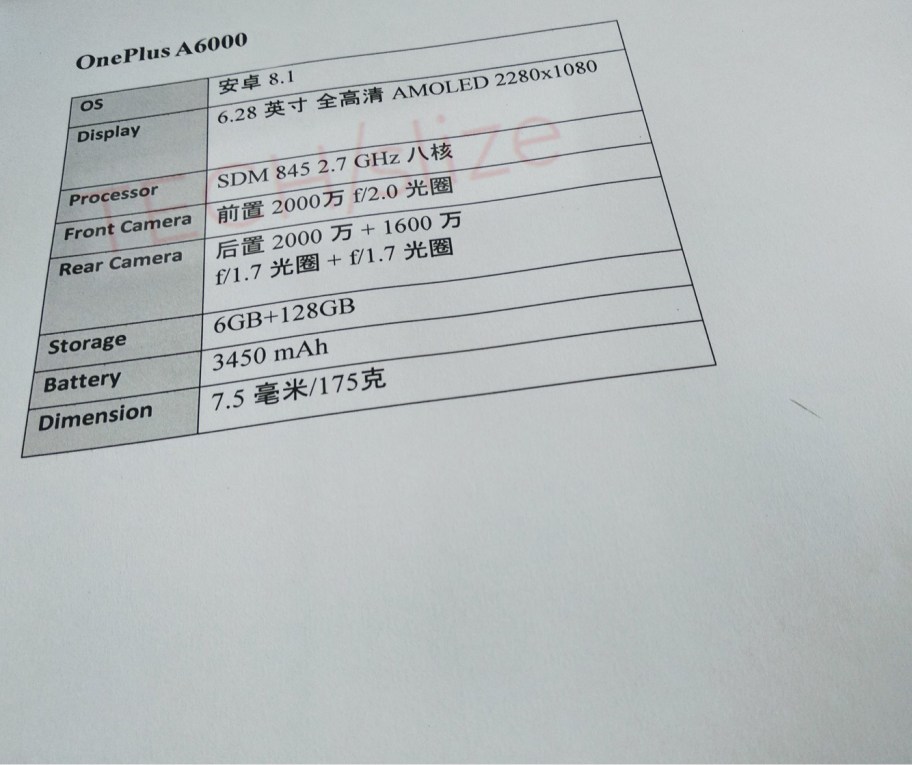 The phone’s battery capacity will reportedly be bumped up to 3,450mAh, whereas the OnePlus 5T sports a 3,300mAh battery. The added battery capacity will make the device a tad thicker at 7.5mm and it will weigh 175 grams, as per the leak, against 7.3mm thickness and 162 grams weight of the current OnePlus flagship. These dimensions are very similar to the recently announced OPPO R15 which is expected to donate its design to the OnePlus 6.

Internal storage is another department that may see some major changes. The leaked document suggests that 6GB RAM will be paired with 128GB of internal storage, while the 5T comes with 64GB of flash memory with the same RAM capacity. Another variant of the alleged OnePlus 6 was revealed in the previous leak with a RAM of 8GB and 256GB of internal storage. The price of the higher end variant was said to be $749 in that leak, making it the costliest OnePlus smartphone.

Other details include the presence of Android 8.1 Oreo with OxygenOS most probably running on top of the international variant. As it was revealed earlier, the OnePlus 6 will be powered by Qualcomm Snapdragon 845 processor while it will have a dual-camera setup on the back with 20MP and 16MP sensors having f/1.7 aperture each. The document also reveals a 20MP front-facing camera with f/2.0 aperture.