After the unveiling of Realme C21 earlier this month, it is now C25 that is making a debut on March 23. Realme posted an official poster on its Realme Indonesia website according to which, the event will be streamed live starting at 1:30 PM WIB on Realme ‘s official YouTube channel.

The event page does reveal a slight pinch of information related to Realme C25. It includes a Helio G70 SoC under the hood along with a giant 6.5-inch display with a waterdrop-shaped notch. There’s a 8MP selfie camera on-board. There’s a fingerprint scanner at the back too in a circular ring. Proceeding further, the device will arrive with a triple AI camera hosting a 48MP primary shooter along with two others. 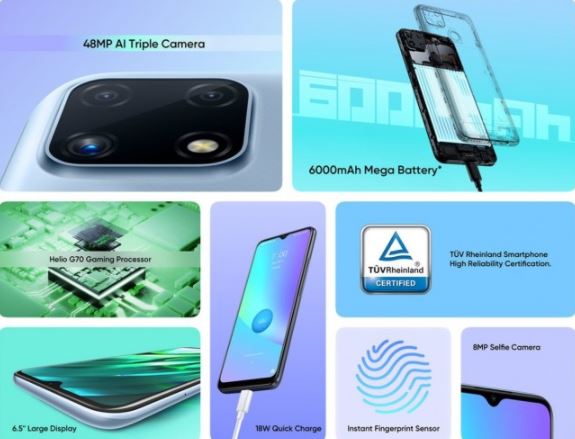 Realme C25 sports a 6,000 mAh battery under the hood and supplied with a 18W charging backup that should juice up the battery to its capacity in a couple of hours if not more.

If that’s not all. Realme C21 is also arriving in Indonesia on next Tuesday i.e. March 23. The device sports a Helio G35 SoC under the hood along with a 13MP triple camera setup at the back, a beefy 5,000 mAh battery and a giant-sized 6.5-inch HD+ LCD panel with a waterdrop-shaped notch on-board.