Samsung is actively pushing out more 5G smartphones than other OEMs. After launching the Samsung Galaxy A42 5G just last month, Samsung’s yet another 5G smartphone has been spotted on Geekbench and this time around, it sports a MediaTek processor. I am talking about the upcoming Samsung Galaxy A32 5G.

As per the Geekbench listing, Samsung Galaxy A32 5G has a model number SM-A326B. Apparently, it scored 477 points on Geekbench 5’s single-core test while scoring 1,598 points on the multi-core test. As per the listing, the Galaxy A32 5G sports a MediaTek Dimensity 720 SoC on-board manufactured on 7nm node and offers two Cortex-A742 5G cores clocked at 2GHz followed by six Cortex-A55 cores clocked at 2Ghz and finally, there’s a Mali-G57 MC3 GPU that handles all the graphics processing. The device packs in a 4GB RAM and runs on the Android 11 out-of-the-box and preferably has OneUI 3.0 or newer under the hood as well. 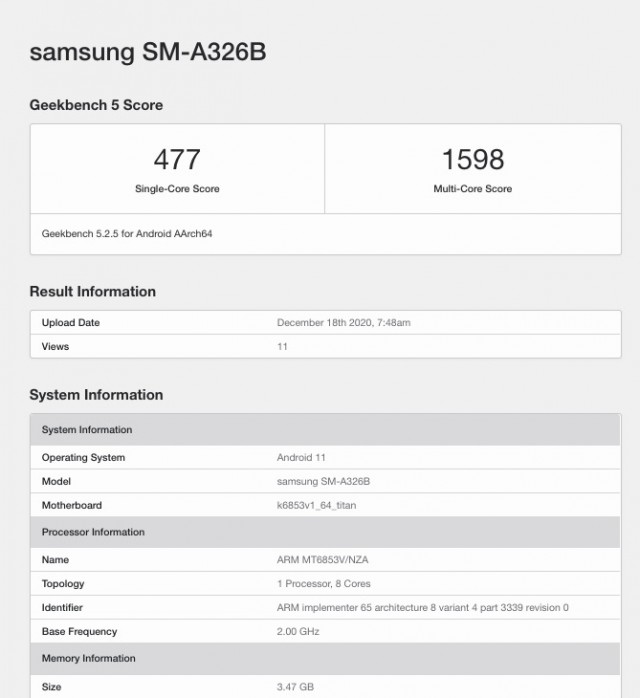 There’s not much known about the Galaxy A32 5G yet although earlier leaks suggest that the phone is likely to have a 6.5-inch Infinity-V display. It sports a quad-camera setup with three lenses protruding just above the back panel with a 48MP taking the helm while the fourth one is flushed with the back panel. The construction of the phone is all plastic with front glass, a heavy chin, and bezels to go around. It has a dimension of 164.2×76.1×9.1mm dimensions.

Lastly, the phone supports Bluetooth 5.0 with LE, USB Type-C port, and supports up to 15W of fast charging. It sports NFC with a headphone jack, a side-mounted fingerprint scanner, Wi-Fi 802.11 b/g/n/ac among others.