Xiaomi Mi 11 Ultra is at the top of the hierarchy when it comes to the Mi 11 series. With the best of specifications and more, Mi 11 Ultra is undoubtedly the most powerful Android smartphone from Xiaomi with SD888, triple camera setup, an A+ rated AMOLED display, and a 67W wired and wireless charging support as a few of its pros.

Xiaomi Mi 11 Ultra truly stands out among its siblings and its predecessors. It has a giant form factor with an edge-to-edge display and a tiny punch-hole cut-out for the front camera. A premium curved display adds a lot of plus points when using this phone. Turn it and you will find a giant rectangular camera bump housing a triple camera setup that pops up like anything. There’s a secondary display mounted adjoining to the camera setup that acts as a viewfinder and more.

When talking about the display, DisplayMate released its scores of A+ for Xiaomi Mi 11 Ultra and that holds true. The display is a giant 6.81-inch AMOLED panel with 1440p+ resolution and a 120Hz of refresh rate. It is protected by the ultra-protective Gorilla Glass Victus. The display has Dolby Vision and it is HDR10+ compliant and comes with 100 percent DCI-P3 calibration. 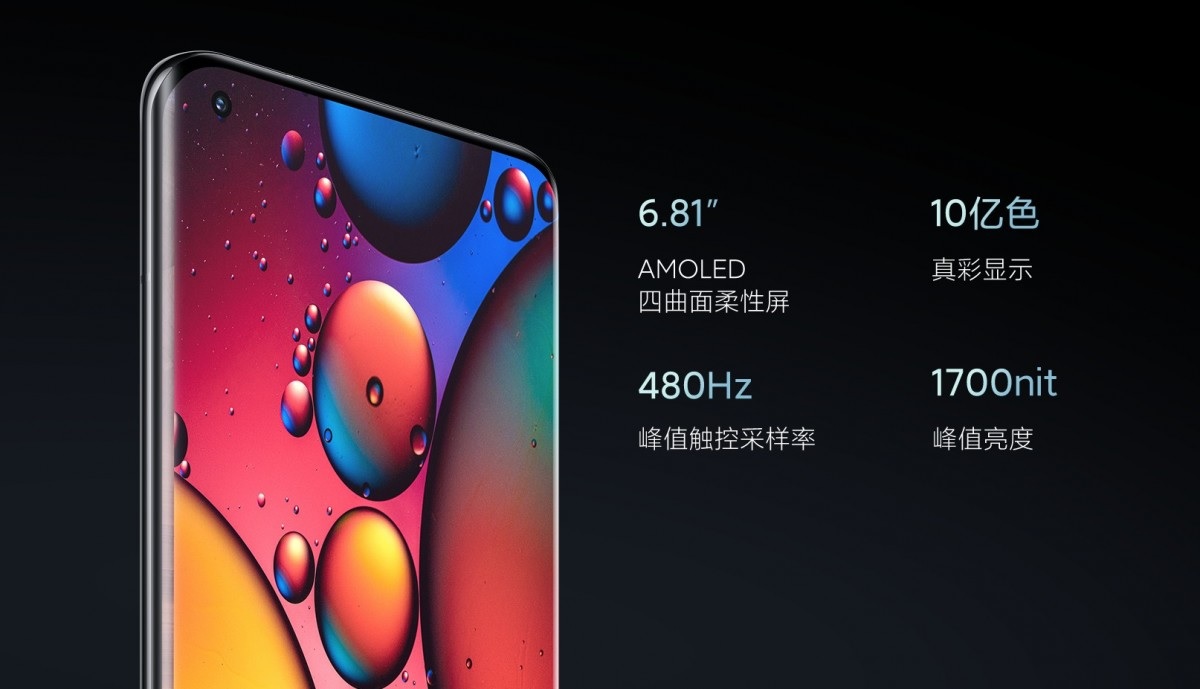 It has a 480Hz touch sampling rate which is twice as much as many flagship smartphones out there. The display reaches a whopping 900 nits of typical and 1700 nits of peak brightness. This makes it easier for viewing the display no matter how broad sunlight you are under. You get a curved display with Mi 11 Ultra with minute bezels around the edges that make it feel like an edge-to-edge display.

The secondary display is a 1.1-inch AMOLED panel with a 126×294 pixels resolution and a peak brightness of 450 nits. It acts as a viewfinder as well as gives you access to all the notifications and more.

The device arrives with an IP68 rating allowing it to be almost unaffected with dust and submerged underwater at 1.5meters for half an hour without any issue.

Just like many of its siblings, the Mi 11 Ultra comes with the latest Qualcomm Snapdragon 888 SoC under the hood. It comes with appendages such as 256GB of UFS 3.1 storage and 12GB LPDDR5 RAM. There’s a triple ISP on-board the chipset that allows Mi 11 Ultra to reach its full potential using the three rear camera sensors.

The device comes with Wi-Fi 6E support as well as dual SIM 5G support, an IR blaster, and NFC for contactless payments. It has Bluetooth v5.2 for wireless connectivity and as with the majority of flagship phones now, it is done with a 3.5mm headphone jack so you won’t find it here.

Xiaomi Mi 11 Ultra arrives with a stereo speaker setup tuned by Harman Kardon. It produces impeccable sound quality thanks to the bottom and top-firing speakers setup. There’s Hi-Res Audio certification awaiting for you as well.

Xiaomi Mi 11 Ultra runs on the latest Android 11-powered MIUI 12.5 which is an intermediatory to MIUI 13. There’s no doubt Mi 11 Ultra will get its hands on Android 12 & Android 13 while a few generations of MIUI updates will arrive on the device over a period of its software coverage as well.

Certainly, one of the strongest suits when it comes to Xiaomi Mi 11 Ultra, the device has got some of the best camera specifications that even a flagship smartphone sports. It introduces a triple camera setup housing a massive Samsung GN2 sensor along with a 128-degree ultra-wide snapper, and a 120x periscope sensor.

The primary Samsung GN2 sensor has made its debut with Mi 11 Ultra housing a sensor at 1/1.12” which is the largest available in the mass market phone market. It uses a 1.4micrometer pixel size even before diving into pixel binning while going as large as a 2.8micrometer using the 4-in-1 binning technology. The sensor has got Dual Pixel Pro that improves accuracy and autofocus speed while the 4-axis Optical Image Stabilization makes it super steady. It also has a Smart ISO Pro that lets users shoot HDR photos in an instant. 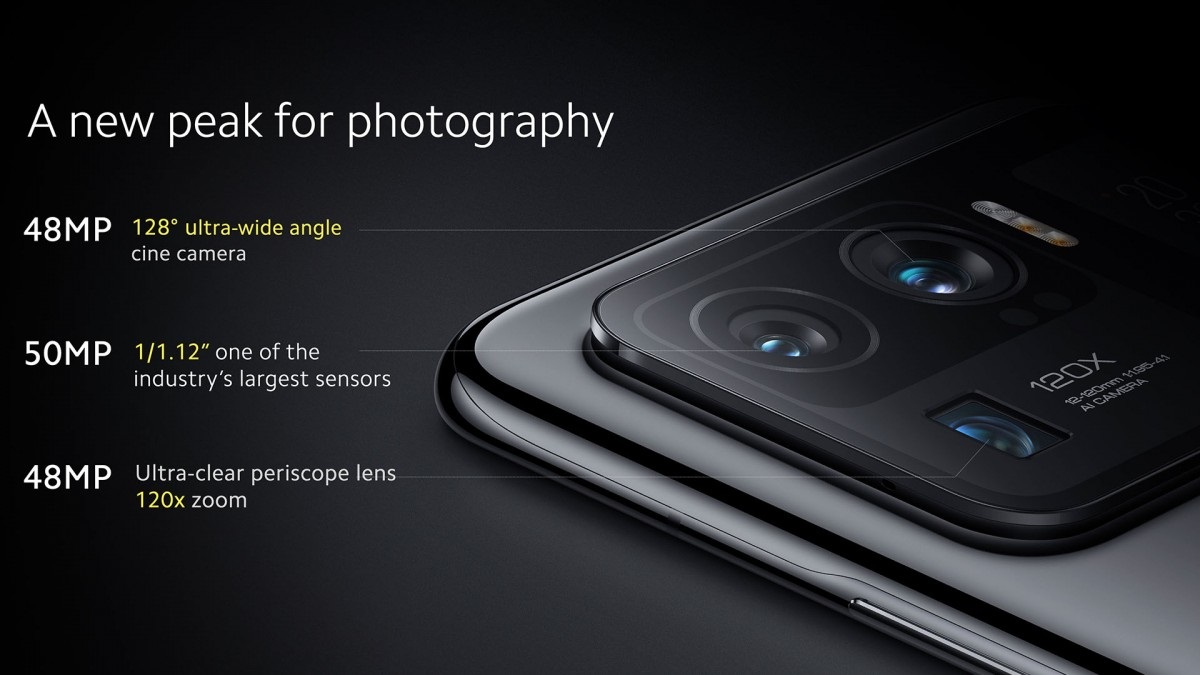 Mi 11 Ultra comes paired with a 48MP Sony IMX586 sensor capable of reaching 5x optical, 10x hybrid, and 120x digital zoom on-board. It also has a humongous 1/2.0” sensor size and 0.8micrometer pixel size that upsurges to 1.4micrometer after pixel binning. For those uninitiated, the Samsung Galaxy S21 Ultra houses a 10MP 1/3.24” sensor size with 1.22micrometer pixel size which is enough to show just how massive the Mi 11 Ultra’s periscope lens actually is. You can record videos at 8K resolution using the periscope sensor.

You get a Sony IMX586 48MP ultrawide snapper with a whopping 128-degrees of field-of-view which is great for ultra-wide shots and macro photography as well. It can also snap videos at 8K resolution and has Night mode support along with all two other sensors. All that in a triple camera setup housed in a humongous rectangular camera array.

The device gets its power from a 5,000 mAh battery under the hood which has a 67W wired and a record-setting 67W wireless charging support. It is able to juice up the battery in just 36 minutes from 0 to 100 percent.

Xiaomi Mi 11 Ultra is using an 6x supercharge technology along with a custom chip that offers multi-level control tech upping the charging speed by 10 percent. There’s a 10W reverse charging feature too in the rooster.

Talking about the price tags, the Xiaomi Mi 11 Ultra is available globally. You get the 12/256GB variant in Europe at €1,200 although the pricing for other variants are not available,