In a whitepaper titled ‘Software and Security Updates: The Missing Link for Smartphones’, research firm Counterpoint Research found out the intricate stats on how often and when do Android smartphones manufacturers upgrade their phones. They collected a trove of data between Q3 2018 and Q2 2019 i.e. a year after Google launched its Android Pie 9 OS and found some surprising and shocking details.

According to the whitepaper, the average time consumers keep their flagship smartphones before upgrading has increased astronomically. In fact, in markets like the U.S., Europe, and China, the duration has crossed 20 months mark which means flagship smartphone users tend to upgrade their phones only after 2 and a half years at an average. This puts emphasis on the software updates and security patches on these smartphones irrespective of the tier the phone belongs to. 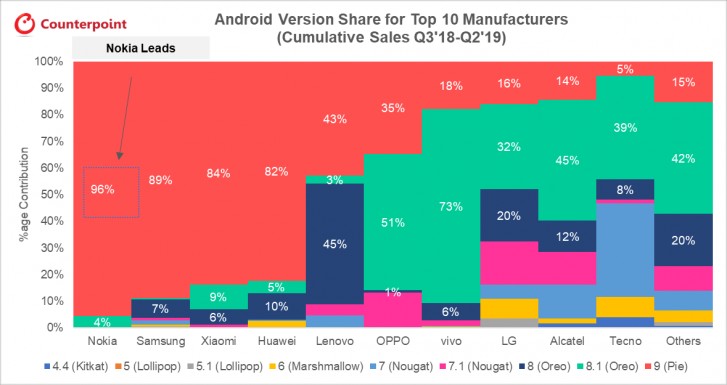 The research found out that HMD Nokia is leading the stats with 96% of smartphones sold between Q3 2018 and Q2 2019 where either the devices which released with Android Pie out-of-the-box or have received the update and the said data is taken based on a period of 12 months which is the fastest.

Further, Samsung is lagging behind at 89% while Xiaomi and Huawei are at 84% and 82% respectively. The Chinese smartphone brand Xiaomi is relatively one of the fastest OEMs to update its mid-range smartphone that falls in under $200 category which is where most of the OEMs don’t shine. Nokia on the other tends to have a good track record over updating its mid-range smartphones similar to how it updates its flagship smartphones.

Note that the findings don’t include a few brands like OnePlus which has a reputation of being one of the fastest brands to update the Android firmware in its smartphone lineup which is numbered and every phone starting from OnePlus 3 launched in early 2016 is running on Android Pie 9 which makes its score at 100%. 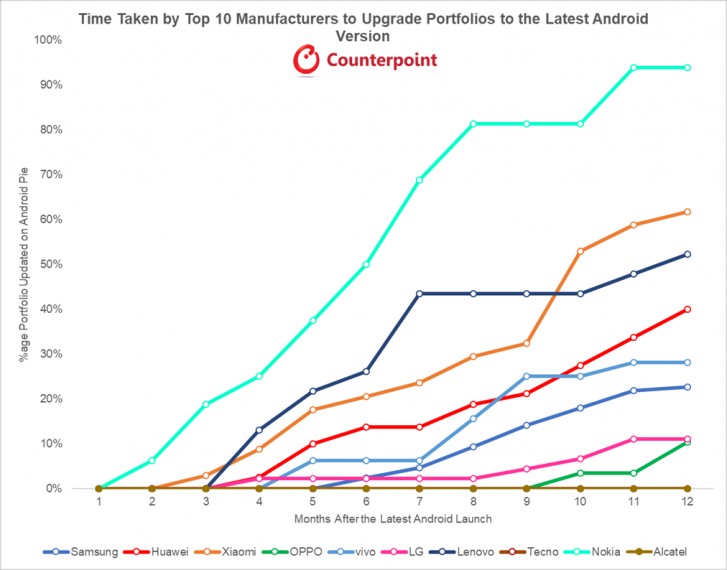 As Peter Richardson, Research Director at Counterpoint Research puts it, updating the software on any smartphone is crucial. Since the consumer awareness about it is low and how OEMs usually don’t discuss it openly, people usually neglect any updates that might come around while many smartphones are left out of the loop. The operating system is the backbone as it acts as an interactive medium between apps and components. Performance and other characteristics of any phone can be linked to its operating system without any doubt and the most important aspect of updating the OS is its security and privacy of the users.

When asked in pertaining research, the firm found that out of ten features that people care about, the software was nowhere to be seen. Back to the findings, Samsung is one of the laggards that can take a few months to unleash Android updates to its smartphones where the flagship phones are prioritized followed by others which could take almost a year or even more. The Samsung Galaxy J7 released back in 2018 has just started receiving Android Pie.

Brands with a huge portfolio like Tecno and Alcatel are lagging a lot in terms of Android updates with just 5% and 14% of smartphones updated to the latest OS respectively. In fact, there are smartphones from these brands still running on Android 4.4 Kitkat which was released almost half a decade ago. Also, one of the reasons why brands with a wider portfolio tend to skip providing updates is because their lifecycle is limited to around six months.