Oppo released the first-gen Oppo Reno earlier this year followed by a reprised second-generation in October. Now, the Chinese smartphone giant is looking forward to launching third-gen Reno smartphones in December and this time around, it will be packed with a lot of features including 5G.

Talking about the phone, Opp’s VP Brian Shen tweeted that the phone will be called Oppo Reno 3 Pro 5G which hints towards its apparent siblings like Reno 3 4G and a non-Pro Reno 3. Based on the teased images, the phone is likely to have a punch-hole camera setup which is a bit more clear if you see the render released by Dutch site Lets Go Digital. Either the phone has a larger display or the punch-hole cut-out is smaller than others so that’s a bit confusing.

Oppo Reno 3 Pro 5G is also the company’s first smartphone to get Qualcomm’s dual-mode 5G modem that works for both standalone access (SA) and non-standalone access (NSA) types of 5G networks that will offer the phone with a nationwide 5G coverage. 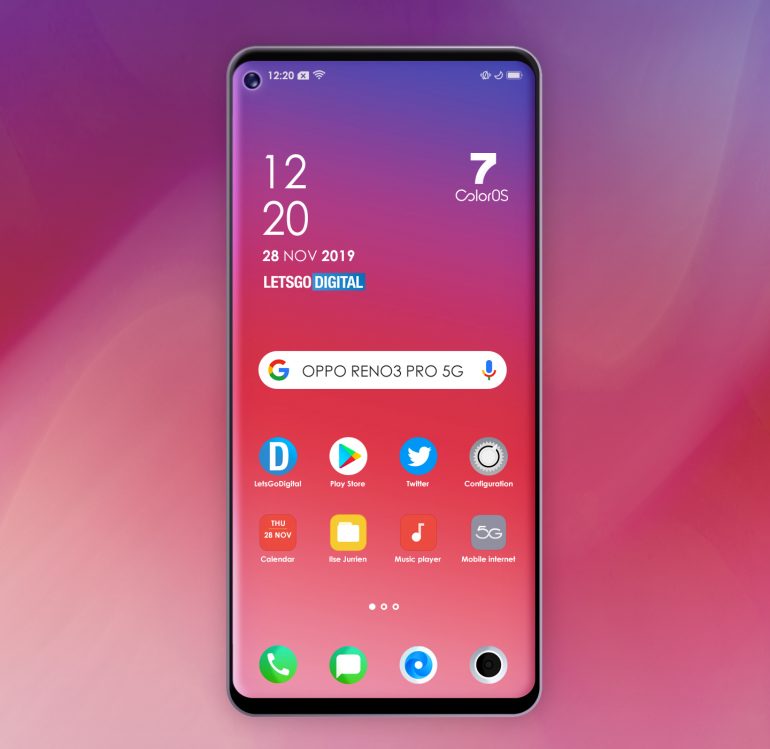 Apart from that, the render is pretty impressive as it shows how the phone might look like with a punch-hole cut-out and curved display with tiny bezels on the right and left and a bit thick chin which is still thicker than the top bezels. The device will also be the slimmest when it comes to 5G phones with dual-mode at 7.7mm excluding its camera bump which is expected to be a quad-camera setup.

Moreover, the device is likely to have a large 6.5-inch FHD+ AMOLED curved panel with a refresh rate of 90Hz per second similar to OnePlus 7 Pro and the upcoming Vivo X30 5G where coincidentally, all the three companies belonging to the same group i.e. BBK Electronics.

Furthermore, the device is likely to be powered with 5G ready Snapdragon 735 SoC with 256GB of internal storage and 8GB of RAM. There will be a standard 32MP front selfie shooter while the rear which is expected to be quad-camera will have a 60MP primary sensor from Sony. The phone will be able to make up to 2x to 3x of optical and 5x of hybrid zoom.

One of the best parts of the upcoming Oppo Reno 3 Pro 5G is that it will run on ColorOS 7 based on Android 10. The new OS brings fluidity to the display along with better haptic feedback, improve app starts by 30%, touch response is quicker, audio quality is at the optimum and the UI has been tweaked a lot to give it a premium feel and usage.

Talking about the pricing, the Oppo Reno 3 Pro 5G is expected to carry a price tag between 425 to 465 Euros or 3,300 to 3,600 Chinese Yuan in China. Without any doubt, the price will change when it arrives in Europe although there will be different pricing for each Reno3 model bifurcated by 4G and 5G support.