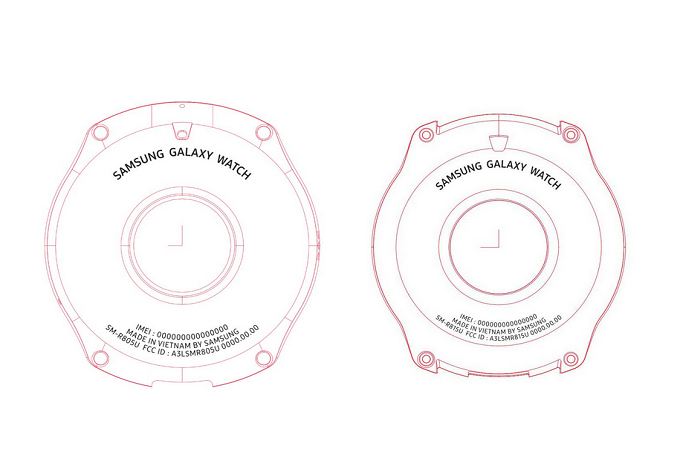 Earlier, a 1.2-inch SM-R815U was approval which sports a 43.4mm thick case while the newly approval SM-R805U is a larger 1.3-inch display with a 48mm thick case. As per the documentation filed by Samsung, both the variants host the same LTE bands which mean, the larger model will also support all four major stateside carriers along with 802.11b, 802.11n, 802.11g Wifi support.

Further, the larger variant appears to be sporty watch when compared to the smaller variant which appears to be s regular use variant. All the predecessors in the Samsung smartwatch lineup were monikered as S1, S2, S3, however, instead of naming the latest smartwatch variants as S4, Samsung opted for the moniker Galaxy Watch. Further, both the watches are expected to be rolled out with 500mAh lithium-ion batteries along with 4G, Bluetooth, and Wifi.

Earlier, sources claimed that Samsung could roll out these smartwatches with WearOS, however, the rumors were clenched and now, we know that it will sport Samsung’s Tizen OS. Samsung hasn’t yet confirmed its date of release, however, sources suggest that it could be released on August 9 when Samsung Galaxy Note 9 will be unveiled or if the launch is delayed, people will get to see the Samsung Galaxy Watch at the IFA 2018 to be held on August 30 in Berlin, Germany. Check out the CAD drawings posted above in this blog until the official photos are not released.