Samsung is yet to announce the Samsung Galaxy M22 which is the successor to the M21. The device is right around the corner because it is expected to arrive in Europe in the coming months. Galaxy M22 made its entry on Bluetooth certification which is one of the certifications that smartphones arrive at while making their launches imminent. The certification states that the device will have a model number SM-M225FV_DS where the “DS” denotes Dual-SIM capability. Turns out a European vendor posted the pricing for the device including the VAT even before its release.

According to the pricing spotted on the website, the Samsung Galaxy M22 is likely to fetch a price tag of EUR 239.90 which is for its 128GB+4GB variant. It includes the VAT too.

Well, this price goes around the speculations that were raised earlier. According to previous reports, the smartphone is likely to share its specifications with Galaxy A22 except for some M-inspired specs that will be altered. An FCC filing states that Galaxy M22 will get a 25W fast charging support and will have a 15W charging brick in the retail box. 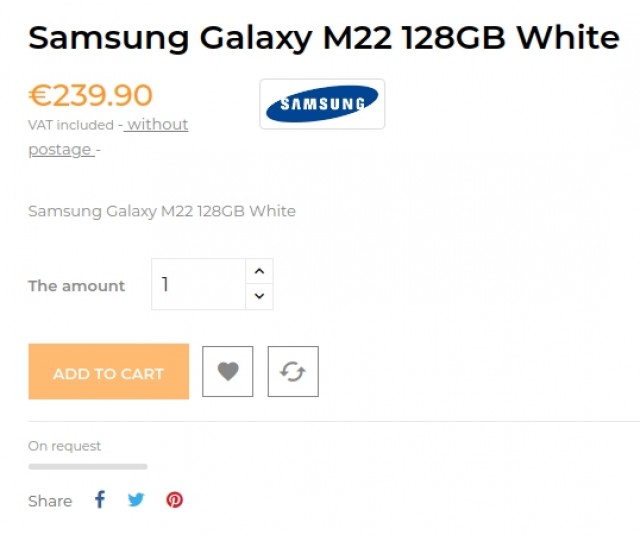 The Geekbench listing also mentions that Galaxy M22 scored 374 and 1361 points on single-core and multi-core tests which makes it underpowered with the price tag the European vendor posted about on the website.

Next up, Galaxy M22 is likely to pack in a battery equal to or bigger than 6,000 mAh since the Galaxy M31 had a 6,000 mAh battery. This seems plausible because M-series is widely focused on the battery life of their smartphones thus, even a large 7,000 mAh battery is not a big deal for the series.

As said, Samsung hasn’t confirmed any bits of specifications. Thus, we are left with speculations according to which, Galaxy M22 is likely to get a 6.4-inch 720p Super AMOLED display with a 90Hz refresh rate. The device will offer a 48MP primary plus an 8MP ultrawide snapper with either depth or macro or both sensors.

The phone will arrive in at least three color variants i.e. White, Blue, and Black. Lastly, the device is likely to arrive in the coming months as there are no fixed or tentative dates available yet.