The Countdown has begun. Samsung has officially declared ‘February 20’ as the day when South Korean tech giant will finally launch the most-anticipated Samsung Galaxy S10 lineup. From Infinity-O display to 5G, from Exynos chipset to Snapdragon 855, here are all the rumors, leaks, confirmed specs that we know about the upcoming Galaxy S10 lineup as have rounded ‘em all in this blog.

To summarize, there will be at least four Galaxy S10 models that will be unleashed at the ‘Unpacked’ launch event that will be live at 11:00 AM PT on February 20 at Bill Graham Civic Auditorium and will be aired in India simultaneously at 12:30 AM IST on Samsung.com. The first will be a standard Galaxy S10, a ‘Plus’ variant Galaxy S10+, a lite variant called Galaxy S10 E or S10 Lite, and a 5G Galaxy S10.

The base or standard variant for the upcoming Galaxy S10 lineup will feature a 6.1-inch curved Infinity-O display (possibly with Super AMOLED). It will have a curved panel with a punch hole of the top left side on the screen for its front camera along with thin and symmetrical bezels on opposites sides.

As per what we know so far, Samsung Galaxy S10 will feature an in-display fingerprint scanner although it is highly probable that it might not be ultrasonic but we aren’t sure. Under the hood, the device will sport a 8nm Exynos 9820 SoC which is bound to release in India and few other countries while the rest of the world will get the stunningly powerful 7nm Snapdragon 855 SoC which is anytime faster than the in-house Exynos equivalent although that is a presumption based on the efficiency of manufacturing nodes.

The camera module is rather interesting to know. Galaxy S10 will feature a single front-camera while the back will get a triple-camera setup including a standard, a telephoto, and an ultra wide-angle camera lens.

The device is expected to boost a 6GB RAM and might feature a higher 8GB variant too with internal storage starting at 128GB. But wait, Samsung will offer higher 256GB and 512GB variants too thanks to the microSD support that Galaxy S10 series will get in spite of the fact that many brands are getting rid of it. A previous leak suggested that it will sport a 3,500 mAh battery although the specs haven’t been confirmed yet so take it with a pinch of salt.

Moving towards the higher-end Galaxy S10+, it will sport a 6.4-inch curved Super AMOLED high-quality Infinity-O display. Similar to Galaxy S10, it will too feature an in-display fingerprint scanner. Ice Universe posted that the device might feature a chunkier 4,000mAh battery and will be a subtle 7.8mm thick.

Unlike Galaxy S10 (base), it will get a quadruple rear camera setup with a standard, ultra a wide-angle, telephoto, and a ToF 3D camera for better depth sensing along with dual-camera module at the front housed within a small punch hole on the top left side of the screen.

The device will boast a Snapdragon 855 octa-core SoC made with 8nm node similar to Galaxy S10 but will also feature an Exynos 9820 SoC variant as well. It is speculated to be available in three storage variants i.e. 128/256/512GB and two RAM configurations that are 6/8GB. But there are speculations that a 12GB RAM with 1 TB storage variant is also sought to launch at the February 20 event. 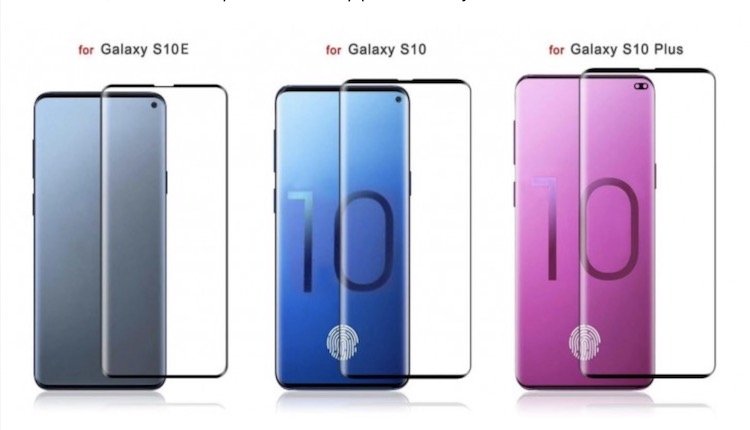 Earlier known as Galaxy S10 Lite, a retailer ‘Mobile Fun’ hinted that it will be officially known as Galaxy S10 E. It will feature a smaller 5.8-inch Infinity-O flat-surfaced display unlike its elder siblings although it is a ‘Lite’ version for namesake since almost all the specs are high-end.

Rumors are that the device could boost a 4GB RAM with 64GB internal storage plus another 128GB variant might be waiting at the launch event too. The device will get a 3,100 mAh battery which isn’t that great but not that dull either. There is a report on a 6GB RAM variant that appeared on GeekBench as well.

It will get the same Snapdragon 855 or Exynos 9820 SoC under the hood which is why I call it a ‘Lite’ variant for namesake. But there are subtle changes such as it will get a dual-camera setup at the back while the front camera remains the same as Galaxy S10 and possibly with the same specifics and configurations.

The most-happening news from Samsung is that it is finally going to unveil a 5G model of Galaxy S10 too. Although the specs for the 5G are scarce, we know that it will cost more than costly S10 variants. It will surely include a Snapdragon 855 SoC with X50 5G modem from Qualcomm since Samsung confirmed that it will be using Qualcomm’ chips instead of its in-house 5G chips. The 5G Galaxy S10 will be available in South Korea and the United States first although we are still unaware of its global launch so you’ll have to wait to try it elsewhere. Finally, Dutch website GalaxyClub.nl mentioned the 5G variant of the upcoming Galaxy S10 smartphone will host a 5,000 mAh battery which is a must-requirement since supporting 5G network might drain the battery soon.

Further, the ‘Lite’ Galaxy S10 E will fetch a price tag of £669 or INR 61,000/- while the price tag for larger storage variant if indeed available is not visible yet.

According to GSMArena, all the Galaxy S10 models will sport the new LPPDR5 memory chips which are known to be 30% powerful than the currently used LPPDR4X chips while being at least 1.5 times faster in terms of data transfer speeds at almost 6,400Mbps. This would enable Samsung to sustain the power-hungry 5G support and AI-powered applications that will run on its 2019 devices.

One of the confirmed features on Galaxy S10 devices is the improved Samsung ‘Bright Night’ mode which is equivalent to Google’s Night Mode that will take stunning, brighter, better photos in low light with long exposure and efficient software to handle the optimization and processing of the images. As of now, Google Pixel’s Night Mode is the industry leader in terms of night mode photography while OnePlus’ NightScape is in the league too.