Vivo launched its sub-brand iQOO merely a few days ago and it soon grabbed headlines with its supposed foldable phone as its first-ever smartphone to launch. However, during an NBA All-Star Game on Tencent Sports in China, iQOO showed the very first glimpse of the first phone from the brand which isn’t a foldable phone for sure.

The video shows a presenter showcasing iQOO’s first-ever smartphone in Chinese. Although we aren’t able to confer many details it sure that it will be a regular if not near a bezel-less smartphone. The video grab shows a triple-camera array at the back arranged in Vivo V15 Pro-like periscope vertically stacked arrangement of not-so-defined sensor size. 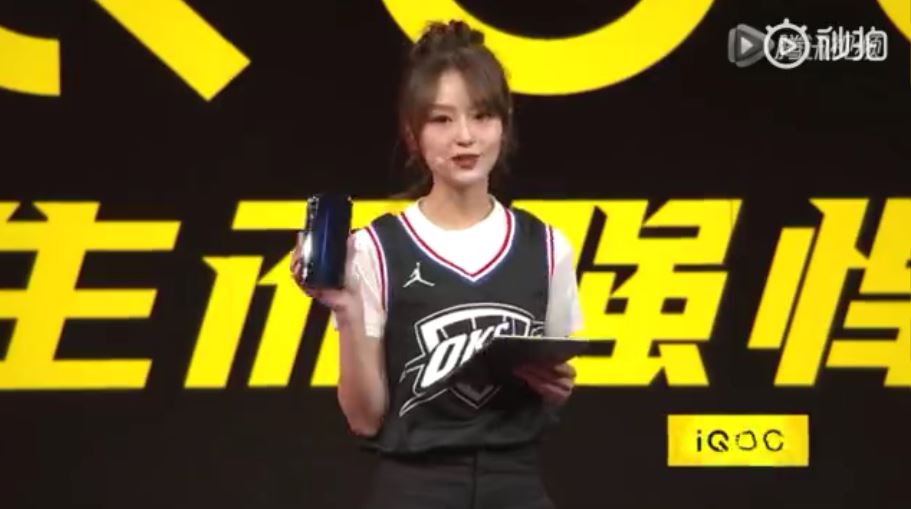 DriodShout states that the unnamed iQOO smartphone will carry a sixth-generation in-display fingerprint scanner while even the latest flagship Vivo NEX 2 uses a fifth-gen in-display FPS. The device has a blue gradient at the back with an iQOO label embossed (pronounced as i-Qoo) written vertically on left side of the back panel.

We don’t know much about the device yet but it is speculated that it will feature a front pop-up camera assembly similar to Vivo V15 Pro that will allow grabbing a near bezel-less display. We know that Vivo launched the sub-brand iQOO to deal with the premium smartphone segment with an average price tag of CNY 5,000 or $738. This also hints towards the presence of Qualcomm Snapdragon 855 or at least Snapdragon 845 along with 6/8GB RAM and internal storage ranging between 64GB to 128GB and more which is something all flagship smartphones are bringing onboard.

Finally, the video has actually squashed the rumors about an upcoming foldable device from the sub-brand at least for the time being. It has also squashed the rumors that iQOO will launch a gaming phone as the first device. So, tell us what do you think about this iQOO smartphone and about the rumored foldable phone that was rendered in a previous leak.