It’s only a few weeks since Microsoft released the official version of their new Chromium-based Edge browser and now we are getting the report that Microsoft Edge Surpasses Firefox browser to be the 2nd largest web browser in the world.

Earlier, Microsoft was facing a huge surge in the browser segment. Their own native Edge browser was not getting a good response, then Microsoft thought of taking the help of Google’s Chromium Project and their own few native integrations to come up with a new browser that actually fulfills all your needs like the huge web extensions database, add-ons, web apps, etc.

Recently, Netmarketshare released the data that showed the market share of web-browsers and operating systems. The data is really interesting but not so shocking. 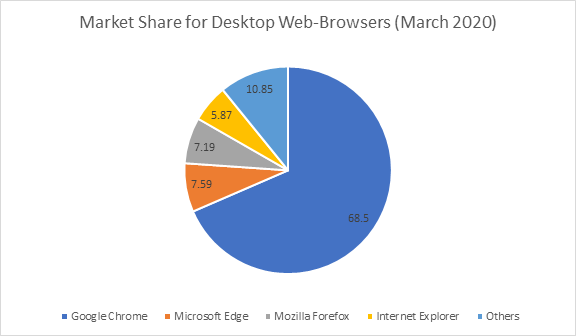 If we talk about web-browsers as of March 2020 then, the all-time favorite(RAM eater though) Google Chrome is still the top place holder with an astonishing share of 68.5% in the market of desktop web-browsers. On the other hand, the second place is now taken by Microsoft Edge Browser that has 7.59% of the total market share for desktop web-browsers. Microsoft Edge has surpassed Mozilla Firefox which has now slipped to third place with 7.19% of the total market. Another web-browser, Internet Explorer is in fourth place with a 5.87% market share.

On one hand, Microsoft must be really happy that their decision to switch to Chromium from Edge-HTML has earned them the second spot, it is quite disappointing to see that Mozilla is losing popularity. Mozilla is facing tough competition not only from Chrome and Edge but, also from Opera and Safari too. Mozilla needs a little bit of work to make the browser easier and consumer-friendly and it will regain its popularity.