Chinese smartphone maker Xiaomi is gearing up for the launch of Xiaomi Mi 9 in February. It is also working on upcoming Xiaomi Redmi Note 7 and Redmi Note 7 Pro could be released next month too. Well, amidst the upcoming launch, a poster has appeared online on Chinese social media site Weibo that goes by the name ‘Redmi X’ with the date inscribed as 2-15 or February 15th.

Talking about Xiaomi Redmi X, we don’t know about its specifications since this is the first time we heard about it. But we expect it to ship with an in-display fingerprint reader or at least that is what’s written on the leaked poster in Chinese. Redmi X will hail the title for the first Xiaomi device to get an in-display FPS. 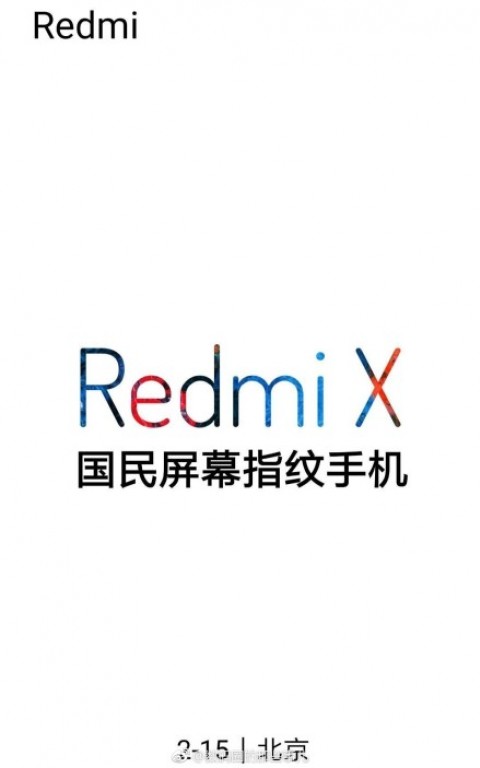 According to a report by PlayfulDroid, the smartphone could be in the budget or mid-range segment with powerful specs compared to the Xiaomi Redmi 7 and Redmi 7 Pro as well. If rumors are to be believed, the upcoming Redmi X could feature a Snapdragon 710 SoC or perhaps a Snapdragon 660 with a water-drop display notch as stated by GSMArena.

Moving forward, the Redmi Note 7 Pro that will be launched during the event is confirmed to feature a robust 48MP rear camera with Snapdragon 675 under the hood and it is expected to launch on February 15 as well. Xiaomi currently has a number of smartphones in the tow to launch such as the Mi 9 as we aforementioned along with a 5G variant of Mi 9 is expected to appear too after the Chinese OEM managed to pull off Xiaomi Mi Mix 3 5G edition last month.