Amidst the Coronavirus outbreak, HMD Global’s Nokia has confirmed that it will launch its latest batch of smartphones in an online-only event on March 19 in London at 4.30 p.m. GMT. Although heavily rumored, leakster Evan Blass posted the press render for Nokia’s entry-level smartphone Nokia 1.3 that will be making it official during the event tomorrow alongside Nokia 8.3 5G, and Nokia 5.3.

Talking about the details that were disclosed after the press render leaked by Blass, Nokia 1.3 bearing model number TA-1207 will sport a single rear camera with a polycarbonate back panel with a vertically lined texture. On the front, there’s a waterdrop-shaped notch consisting of an 8MP shooter as speculated along with thick bezels around the edges and a considerably ginormous chin at the bottom with Nokia’s branding on it.

The phone is less likely to have any fingerprint scanner given its price point and with respect to the render released. There are a power button and volume button to the right along with an additional button to the left as a dedicated Google Assistant button. There’s a 3.5mm headphone jack that you can easily spot on the top right. 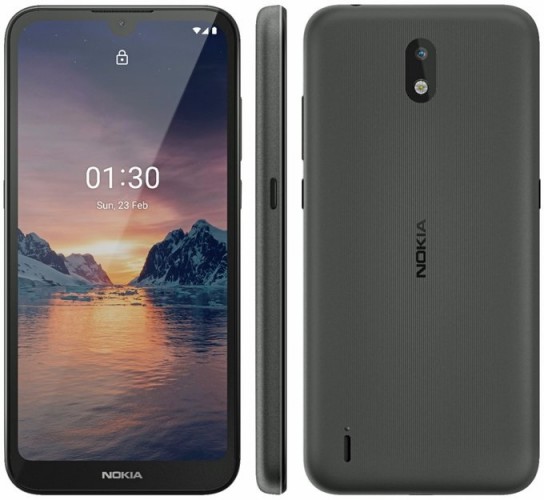 There’s no intel on what the phone will bring on-board under the hood but there’s a slew of rumors that suggest that it will bring 1GB RAM with 8GB of internal storage that can be expanded to 128GB. The device will sport a ginormous 4,000 mAh battery although an FCC listing touted it to be 2,920 mAh. Talking about the optics, it will probably feature a 13MP single rear camera and an 8MP front selfie camera. We don’t know much about the entry-level offering from Nokia just yet.

Nokia is likely to launch its first-ever 5G phone aka Nokia 8.3 5G (or Nokia 8.2 5G) that will run on Qualcomm Snapdragon 765G bring 5G on mid-range devices. The company will also have Nokia 5310 and Nokia 400 4G on the showcase list during the March 19 event as well. Watch out for coverage on True-Tech for more updates.